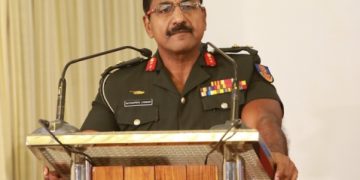 Colombo, April 29 (newsin.asia): The Joint Operations Command (JOC) of the tri-forces and the police began to funcion on Monday with Maj.Gen. Sathyapriya Liyanage as its head. But it will be under the overall supervision of the Chief of Defense Staff, Army Commander Mahesh Senanayake said.

All Army, Navy, Air Force and Police areas within the Western Province and Puttalam District have been placed under command to the Overall Operational Command – Colombo for operational purposes with immediate effect, the Army Headquarters said.

In a statement, the Army said Major General Sathyapriya Liyanage, (Commander, Security Forces – West) would function as the Overall Operational Commander in the establishment.

“Rear Admiral W.A.S.S Perera of the Navy, Air Vice Marshal W.L.R.P Rodrigo of the Air Force and Superintendent of Police L.K.D Anil Priyantha will function as Coordinating Officers of respective services and the Police in the OOC,” it said.

A communiqué sent to the Ministry of Defence by Lieutenant General Mahesh Senanayake, Commander of the Army said the Overall Operational Command (OOC) in Colombo will begin its functions under the Chief of Defence Staff with immediate effect.