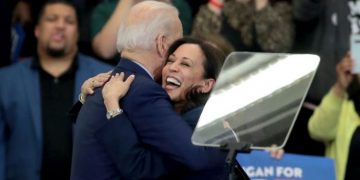 “I have the great honor to announce that I’ve picked @KamalaHarris — a fearless fighter for the little guy, and one of the country’s finest public servants — as my running mate,” the former vice-president wrote on twitter.

Washington, August 12:  Joe Biden, the presumptive Democratic nominee for president, has named Kamala Harris, who is of mixed Black and Indian heritage, as his pick for vice-president in a much anticipated announcement Tuesday that was described as “historic” and “seismic” by Democrats, including many ecstatic Indian Americas, and non-partisan observers.

Biden announced his pick in a tweet late afternoon as speculation reached a feverish pitch on all leading TV channels and social media. “I have the great honor to announce that I’ve picked @KamalaHarris — a fearless fighter for the little guy, and one of the country’s finest public servants — as my running mate,” the former vice-president wrote on twitter.

His campaign followed up with a more expansive explanation of the pick. “Joe knows more about the importance of the Vice Presidency than just about anyone, and he is confident that Kamala Harris will be the best partner for him to finally get the country back on track,” it said in a statement, and added, “Kamala will be ready to tackle the work that is needed to heal our country on Day One of the Biden-Harris Administration.”

In her first public response to the announcement, Harris wrote on twitter:, shortly: “@JoeBiden can unify the American people because he’s spent his life fighting for us. And as president, he’ll build an America that lives up to our ideals. I’m honored to join him as our party’s nominee for Vice President, and do what it takes to make him our Commander-in-Chief.”

A win in November will make Harris the first female vice-president of the United States and set her up the presidency in 2024, at the end of Biden’s first term, or 2028. Most vice-presidents have gone on to run for the top job themselves and win, with some exceptions such as Al Gore.

President Donald Trump, who had earlier called Harris a “fine choice” if picked by Biden, felt differently and accorded the announcement the full Trump treatment. He slammed her as “nasty” and “the meanest, the most horrible, most disrespectful” for her grilling of Brett Kavanaugh at his senate confirmation hearing for the Supreme Court. His campaign called her “phony”.

Harris was not a surprise pick as she had been on everyone’s shortlist of Biden’s choices, which at some stage had 11 names. In recent days the former vice-president had been focussed on three — Harris, former National Security Adviser Susan Rice and Congresswoman Karen Baas. Some days ago, Biden may have tipped his hand inadvertently when notes he held during a press interaction showed several check-marks against her name.

Harris’s mother Shyamala Gopalan (Harris by marriage) came from Chennai. She was a cancer researcher, who raised Harris and the younger daughter Maya Harris, as a single-mother mostly after early separation from Donald Harris, who had come to the US from Jamaica. Gopalan passed away in 2009.

Indian Americans were ecstatic. Ramesh Kapur, a veteran Democrat who hosted a fundraiser for Harris at his home in Boston in 2016 during her senate run, said he believed the Tuesday announcement was the start of a journey. “It’s the beginning of her becoming the first Indian American president — this is a journey.”

“Moment of great pride for the Indian American community,” said Shekar Narasimhan, a top Democratic strategist and fundraiser. “It’s a first in so many ways and will help Joe Biden win the presidency which is the first priority. A seismic shift occurred today and its ramifications will be felt for many decades”.

Harris was friends with Biden’s elder son Beau Biden, who died of brain cancer. But her links to the family were said to have suffered a major blow after she attacked the former vice-president’s record on racism at one of the Democratic primaries. Biden is reported to have been hurt by Harris’s attacks. But Biden made clear in recent days that he does not hold grudges as he considered Harris along with a long list of 10 other women for his vice-president pick.

The Trump re-election campaign picked on that debate exchange to attack Harris. “Not long ago, Kamala Harris called Joe Biden a racist and asked for an apology she never received,” Katrina Pierson, a Trump 2020 senior advisor, said in a statement, adding, “Clearly, Phony Kamala will abandon her own morals, as well as try to bury her record as a prosecutor, in order to appease the anti-police extremists controlling the Democrat Party.”

Harris became the first Indian American woman to run for US president ever — from either party in 2019. The first from the tiny minority community of 4 million was Bobby Jindal, the Republican governor of Louisiana, who didn’t last the primaries that were eventually won by President Trump in 2016. Harris is also the first Indian American Democrat — ale or female — to try for the job; she failed also..

Harris was only the second African American woman of a major political party to run for the presidency. Shirley Chisholm, also a Democrat, was the first, making an unsuccessful bid in 1972. The list thus far, however, has been dominated by men, which includes, most famously, Barack Obama who went on to win two terms. Also, Jesse Jackson, who ran twice, unsuccessfully.

Harris addressed her mixed heritage in her autobiography released 2010, “The Truth We hold: An American journey”. Growing up, her mother and her relatives “instilled pride in our South Asian roots. Our classical Indian names harked back to our Indian heritage and we were raised with a strong awareness of and appreciation for India culture. All my mother’s words of affection or frustration came out in her mother tongue — which seems fitting to me, since the purity of those emotions is what I associated with my mother most of all.”

She also wrote, “My mother understood very well that she was raising two black daughters. She knew that her adopted homeland would see Maya and me as black girls. and she was determined to make sure we would grow into confident, proud black women.”

Harris was sworn in as a United States Senator from California in 2017, only the second African-American woman and first South Asian-American senator in history. She served on the Homeland Security and Governmental Affairs Committee, the Select Committee on Intelligence, the Committee on the Judiciary, and the Committee on the Budget. And quickly earned a reputation for her hard-nosed prosecutorial manner of questioning of witnesses at hearings.

Her website says she has spent her entire life fighting for justice, as a “passion that was first inspired by her mother, Shyamala, an Indian-American immigrant, activist, and breast cancer researcher”.

Harris grew up in Oakland. And after earning an undergraduate degree from Howard University in Washington DC, and a law degree from the University of California, Hastings, she began a career in law in the Alameda County District Attorney’s Office. She became the district attorney of San Francisco in 2003. And after two terms as district attorney, she was elected California’s attorney general. (that’s how she met Beau Biden, who was attorney general of Delaware).

Harris is married to Doug Emhoff and is stepmother to Ella and Cole Emhoff.