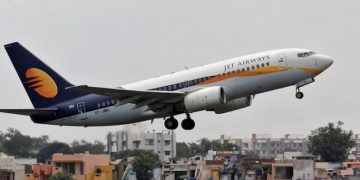 Over a year after Jet Airways ceased operations due to acute cash shortage and piling debt, its new promoters say the airline may take off one again in the summer of 2021. Jet Airways may resume operations next year after it stopped flying in April 2019 due to acute shortage of funds and piling debt. (Photo: Reuters)

December 8 (India Today) – Grounded airline Jet Airways may be able to resume operations by summer next year if the everything goes as per plan, said its new owners. The airline may start both domestic and international operations with all the slots that were available to Jet Airways before it stopped flying.

The same has been announced by the Jet’s new promoters, Murari Lal Jalan and Kalrock Capital, who said, “The Jet 2.0 program is aimed at reviving the past glory of Jet Airways, with a fresh set of processes and systems to ensure greater efficiency and productivity across all routes.”

It may be noted that the new promoters have also decided to stick with the Jet brand due to its value and existing flight slots at various airports. The statement by the new promoters said that Jet Airways will “operate all of its historic domestic slots in India and restart international operations”.

“If everything goes as per plan and the consortium receives the NCLT and regulatory approvals on time, Jet Airways would be back in the skies by the summer of 2021,” they added.

The new promoters of the ailing airline said the vision is to “regain lost ground” and set new benchmarks for the airline industry with the tag of being the best corporate full-service carrier operating on domestic and international routes.

“The consortium’s vision is to regain lost ground, set new benchmarks for the airline industry with the tag of being the best corporate full-service airline operating on domestic and international routes,” the statement said.

“The Jet 2.0 hubs will remain Delhi, Mumbai and Bengaluru like before. The revival plan proposes to support tier-II and tier-III cities by creating sub-hubs in such cities,” they added.

Manoj Narendrer Madnani, a board member of the Jalan Kalrock consortium, said, “Jet has been a brand with a glorious history of over 25 years, and it is the vision of the consortium to put Jet Airways back in the skies at the earliest opportunity. We aim to re-energise the brand by infusing energy, warmth, and vibrancy into it while making it bigger and better.”

“With the revival of Jet Airways, it will restore the confidence among Jet customers to fly again and experience its world-class facilities,” he added.

Besides passenger flights, the new promoters said in their statement that the airline will also focus on cargo operations in a bid to increase revenue.

Jet Airways, one of the largest airlines in India, ceased operations in April 2019 due to acute cash shortage and piling debt. It still has to clear a huge pile of debt which it owes to thousands of creditors.