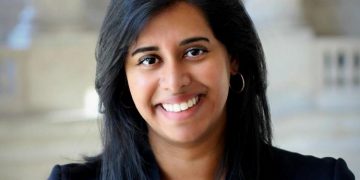 Her doctor father Wijeyadevendram Ravindran was a student of St.Thomas' College in Colombo Rohini Lakshmi Kosoglu, who created history when on Dec. 10, 2018, she became the first South Asian American to be appointed a chief of staff in the Washington, D.C. office of a U.S. Senator, has said that “while it is an honor to break any barrier,” her boss, Kamala Devi Harris — the first-ever Indian American U.S. Senator—”has a long history of doing that herself.”

In an exclusive interview with India Abroad, Sri Lankan- American Kosoglu, whose parents, Dr. Wijeyadevendram Ravindran and Shobhana Ravindran hail from Jaffna, Sri Lanka, said ultimately Harris, who is also half African American, firmly believed “that her staff should reflect the makeup of California and our country, but the Senate as a whole has more work to do in that regard.”

Thus, she said, “We need diversity of experience, background, and opinion in order to promote the best policies for working families in this country.”

Asked how she came to be working for Harris and how excited she was to be appointed chief of staff to a potential presidential candidate in 2020, whose mantra has been that the country today is “at a point of inflection,” Kosoglu, who’s in her early 30’s and currently the only Asian American woman chief of staff in the U.S. Senate, said she had been working in the Senate for over a decade, “and when Senator Harris was elected, I was offered the position of deputy chief of staff.”

In terms of how much of a challenge her new position would envisage and what her top priorities would be besides her administrative duties of running Harris’s D.C. office, she said since joining the new Senator, “it has been an honor to do this work on behalf of Californian and all Americans, and I am proud to continue to work alongside Senator Harris now as her chief of staff as we fight to protect health care and civil rights, and economic opportunity for working families.”

The New Jersey born and raised Kosoglu’s foray into politics began at the time she was a senior at the University of Michigan, Ann Arbor, when she went to work as an intern in the state office of U.S. Senator Debbie Stabenow (D.Mich.) and then when she was offered a position in D.C. had grabbed the opportunity and worked as the lawmaker’s mail room manager.

Then two years later, in 2008, when she had worked her way up in Stabenow’s office as a senior policy adviser, she had an offer to work for U.S. Senator Michael Bennett (D.Colo.) as a policy director and senior health care adviser, which was at the time the Affordable Care Act or Obamacare as it came to be known, was being deliberated in Congress.

Meanwhile along the way she obtained a master’s degree at George Washington University, and in 2016, after a stint with Senator Bennett for seven years, when Harris was elected to fill the seat vacated by Senator Barbara Boxer, and the then Senator-elect offered her the deputy chief of staff position, accepting it was a no-brainer.

Kosoglu, the mother of two children aged 3 and 5, when asked how she was now going to balance all of her responsibilities as chief of staff, motherhood and home, said, “I don’t think of it as a balancing act — where you have to choose one thing or the other. They aren’t separate from each other,” she said, and noted, “If my kids have a day off from school during a workday, they’re welcome to visit the office.”

Kosoglu also said “my family is very supportive of the work I do.”

Her father has been a practicing emergency room physician for the past 36 years at the Community Medical Center in Tom River, New Jersey, and her mother is a homemaker, although she’s received a master’s degree in accounting from Rutgers University. She has one sibling, a brother Raman Ravindran, a video editor at the Aspen Institute.

Earlier, in an interview with Bustle, Kosoglu had said that juggling both roles has been made easier in an office where “we’re transparent about our lives.”

She said: “Certainly Senator Harris encourages our office to be open and honest and transparent with each other with the lives that we have. And she understands the sacrifices we all make to do public service.

“The part that I enjoy is that when we’re able to take certain experiences that we’ve all had … and be able to focus that on policy agenda that helps the middle class,” Kosoglu added.

She also expressed optimism about Congress becoming more diverse in 2019, saying that “as a woman of color in this position, I think it’s important to create a pipeline of talent,” and that diversity is an issue that Harris also “feels is important.”

Kosoglu said, “I think it’s important that when we advance diversity [in Congress], we also advance the ability to address many issues in front of us,” noting that “our staff reflects California — the makeup of California, as well as the country.”

In May, she told Roll Call, the newspaper that exclusively covers the U.S. Congress that she was passionate about advancing diversity and that in this regard, “I definitely try to prioritize if any women, particularly women of color…just want to meet to talk about how to move up on the Hill or they are interested in working on the Hill.”

In announcing Kosoglu’s elevation to chief of staff, Harris said in a statement that “Rohini has been an invaluable leader on our team as we’ve fought for our shared values and the best of who we are during these first two years.

“Californians, and All Americans, are looking to their leaders in Washington, D.C. to protect our families and communities, and I’m proud to continue that fight with Rohini,” Harris said.