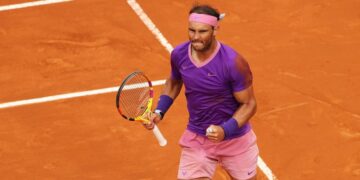 The Spaniard recovered from a potentially dangerous fall after tripping over a raised line to take the latest instalment of the most-played rivalry in modern men’s tennis.

It also re-established Nadal as the overwhelming favourite for the French Open, where he will be aiming for an even harder-to-believe 14th title starting in two weeks.

The top-ranked Djokovic spent nearly five hours on court on Saturday, when he had to rally for a rain-delayed quarter final victory over Stefanos Tsitsipas before winning another three-setter over local favourite Lorenzo Sonego in the semi-finals. Nadal played only once on Saturday, beating Reilly Opelka in an hour and a half.

It was the 57th meeting between Nadal and Djokovic, which is the highest number of matches between two men in the Open era. It was also their ninth meeting in Rome, where they have played more than anywhere else.

Djokovic now holds the slimmest of edges in the all-time series, 29-28, while Nadal holds a 6-3 advantage in Rome overall and 4-2 in Rome finals.

The 10,500-seat Campo Centrale stadium was only a quarter full because of the coronavirus pandemic. But those lucky few permitted to attend on an overcast day at the Foro Italico made themselves heard, shouting Djokovic’s nickname, “Nole, Nole,” on the big points, or “C’mon Rafa.”

For the second time this week, Nadal tripped over a line that appeared slightly raised on the centre court of the Foro Italico. The incident, which resulted in a bloody scrape near the Spaniard’s left knee, made Nadal livid.

At 3-3 in the first set, Nadal chased down a short ball from Djokovic and whipped a cross-court passing shot for a winner. Then his momentum made him slide into the doubles alley and his left foot tripped over the outside line, causing him to roll over onto the clay.

Nadal got up immediately and jabbed his arm into the air angrily and had a word with the chair umpire, who called on court workers to hammer the line further into the clay court.

Nadal had a similar fall in his quarter final victory over Alexander Zverev.