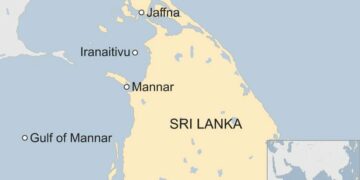 Colombo, March 3 (newsin.asia): The residents of Iranaitivu Island are objecting to the Sri Lankan government’s decision to bury the remains of COVD-19 victims in a plot of land in the island.

The area residents commenced a protest on Wednesday to show their objection to the government’s decision which was announced by the cabinet spokesman Keheliya Rambukwella on Tuesday.

Iranaitivu is a collection of two small islands in the Gulf of Mannar and is part of Kilinochchi district. There are about 300 people (108 families), mostly Tamil Catholic fishermen in the two islands. The navy has a small base there.

The graves that had been dug in by the Navy in the allocated plot of land have reportedly been closed up by area residents, as a mark of protest, newswire.lk reports.

Cabinet Spokesman  Keheliya Rambukwella said the land was selected by the Technical Committee of the Health Ministry for this purpose.

According to newswire, the government later announced that six more locations, including in Mannar and Ampara, were being considered to conduct burials of COVID victims.