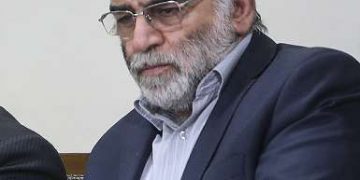 Mohsen Fakhrizadeh was ambushed with explosives and machine gun fire in the town of Absard, 70km (44 miles) east of Tehran.

by Editor
in Around The World, World
Reading Time: 4 mins read
3 0 November 28 (The Guardian) – Iran has vowed retaliation after the architect of its nuclear programme was assassinated on a highway near Tehran, in a major escalation of tensions that risks placing the Middle East on a new war footing.

Mohsen Fakhrizadeh was ambushed with explosives and machine gun fire in the town of Absard, 70km (44 miles) east of Tehran.

Efforts to resuscitate him in hospital failed. His bodyguard and family members were also wounded.

There was no immediate claim of responsibility, but the Iranian foreign minister Mohammed Javad Zarif said Israel was likely to blame, and an adviser to Iran’s supreme leader, Ayatollah Ali Khamenei, vowed retaliation. “We will strike as thunder at the killers of this oppressed martyr and will make them regret their action,” tweeted Hossein Dehghan.

The killing was seen inside Iran as being as grave as the assassination by US forces of the Islamic Revolutionary Guards Corps commander Qassem Soleimani in January.

Israel will face accusations that it is using the final weeks of the Trump administration to try to provoke Iran in the hope of closing off any chance of reconciliation between Tehran and the incoming US administration led by Joe Biden.

The Iranian ministry of defence confirmed Fakhrizadeh’s death in a statement. “During the clash between his security team and the terrorists, Mohsen Fakhrizadeh was seriously injured and taken to hospital,” it said. “Unfortunately, the medical team did not succeed in reviving him, and a few minutes ago, this manager and scientist, after years of effort and struggle, achieved a high degree of martyrdom.”

Zarif immediately called on European leaders to distance themselves from what he saw as Israel’s actions. “Terrorists murdered an eminent Iranian scientist today,” he tweeted. “This cowardice – with serious indications of Israeli role – shows desperate warmongering of perpetrators. Iran calls on international community – and especially EU – to end their shameful double standards & condemn this act of state terror.”

Other senior Iranian politicians said the episode showed only naive Iranians believed the US and Israel could ever be trusted in a negotiation.

Fakhrizadeh had been described by western and Israeli intelligence services for years as the leader of a covert atomic bomb programme halted in 2003. He was a central figure in a presentation by the Israeli prime minister, Benajmin Netanyahu, in 2018 accusing Iran of continuing to seek nuclear weapons. “Remember that name, Fakhrizadeh,” Netanyahu said during the presentation.

He accused Iran at the time of hiding and expanding its nuclear weapons knowhow, saying that Israeli intelligence had obtained a half-tonne cache of nuclear archive materials from the country. Iran has always denied it has any interest in developing nuclear weapons, saying its research was for peaceful purposes.

Asked for a comment on the attack, a spokesperson for the Israeli military said: “We don’t comment on reports in the foreign media.” Netanyahu’s office said it would not comment “on those reports”. Trump for his part retweeted a series of stories in Hebrew and English about the killing.

Iranian state TV carried pictures of the bloodstained site of the attack, which will be seen as a massive intelligence failure by Iran. Photos and video shared online showed a Nissan sedan with bullet holes in the windshield and blood pooled on the road. The car appeared to have been struck from two directions. Security forces quickly blocked off the road where the attack occurred.

Iran, which suffered a record number of new coronavirus infections on Friday, has been on a high security alert, amid reports that Israeli intelligence and secret service have been given the green light to mount attacks on its nuclear installations before Donald Trump stands down as president.

Many Iranian officials believe Trump, in conjunction with Israel and Saudi Arabia, is determined to weaken the chances of diplomacy by antagonising Iran before the US handover of power on 20 January.

Dehghan said in reference to Trump: “In the last days of the political life of their gambling ally, the Zionists seek to intensify and increase the pressure on Iran to wage a full-fledged war. The night is long. We will descend like lightning on the killers of this oppressed martyr.”

During the final months of Trump’s presidency, Israel has been making peace with Gulf Arab states that share its hostility towards Iran. Earlier this week, Netanyahu travelled to Saudi Arabia and met its crown prince, in the first publicly confirmed visit by an Israeli leader. Israeli media said they were joined by US Secretary of State Mike Pompeo.

Biden has said he is willing to rejoin the Iran nuclear deal abandoned by Trump and lift some economic sanctions so long as Iran comes back into compliance with the agreement, especially over its excess stocks of enriched uranium. Israel and Saudi Arabia want the US to remain outside the deal and continue with Trump’s policy of maximum economic sanctions.

Fakhrizadeh, on a US sanctions list, was regarded as the main keeper of Iranian knowledge of its nuclear programme. A brigadier general in the Islamic Revolutionary Guards Corps, and a professor of physics at the Guard’s Imam Hussein University, he was cloaked in mystery.

Until April 2018, no photograph of him was publicly available, and after the killing of several other nuclear scientists, a further shield of secrecy and security had been thrown around him, in an effort to protect him against Israeli assassins.