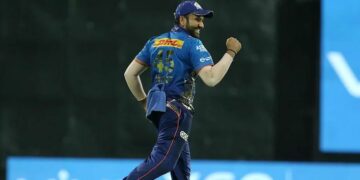 New Delhi, April 21 (India Today) – Mumbai Indians captain Rohit Sharma on Tuesday was fined Rs 12 lakh after the defending champions failed to maintain the over-rate during their 6-wicket loss to Delhi Capitals at the MA Chidambaram Stadium in Chennai.

Rohit thereby becomes the second captain after MS Dhoni to be fined for over-rate offence in IPL 2021. “As it was his team’s first offence of the season under the IPL’s Code of Conduct relating to minimum over rate offences, Mr Sharma was fined Rs 12 lakh,” the IPL said in a statement.

The fine for the first instance of slow over-rate is Rs 12 lakh while the fine is doubled to Rs 24 lakh for the second offence. Along with the captain, every other member of the playing XI is also fined 25 percent of the match fee during the offence.

A third offence in the same season will lead to the captain being banned for a match and fined Rs 30 lakh.

Mumbai were restricted to 137 for 9 in their quota of 20 overs despite Rohit winning the toss and opting to bat. Leg-spinner Amit Mishra picked up 4 wickets and ran through the middle order to hurt the defending champions. Mumbai took the game until the final over but handy contributions from Shikhar Dhawan and Steve Smith made sure Delhi Capitals registered their first win over MI since 2019.

It was evident that Mumbai were trying to slow the game down during the 2nd innings even as batsmen struggled to cope up the slow nature of the Chepauk wicket.

The IPL organisers took note of matches slipping beyond the scheduled finish time in the last few seasons and made sure they came up with strict regulations when it came to over-rates.

According to IPL 2021 Code of Conduct, the minimum over-rate in the 14th season should be 14.1 overs per hour, ignoring the time taken for strategic time-outs. In uninterrupted matches, the BCCI wants teams to finish bowling their quota of 20 overs within 90 minutes.