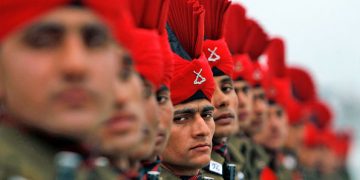 New Delhi, September 27 (The Economist):  To many Indians, their country’s strategic position looks alarming. Its two biggest neighbours are China and Pakistan. It has fought wars with both, and border issues still fester. Both are nuclear-armed, and are allies with one another to boot. China, a rising superpower with five times India’s GDP, is quietly encroaching on India’s traditional sphere of influence, tying a “string of pearls” of alliances around the subcontinent. Relatively weak but safe behind its nuclear shield, Pakistan harbors Islamist guerrillas who have repeatedly struck Indian targets; regional security wonks have long feared that another such incident might spark a conflagration.

So when four heavily armed infiltrators attacked an Indian army base on September 18th, killing 18 soldiers before being shot dead themselves, jitters inevitably spread. The base nestles in mountains close to the “line of control”, as the border between the Indian and Pakistani-administered parts of the disputed territory of Kashmir is known. Indian officials reflexively blamed Pakistan; politicians and pundits vied in demanding a punchy response.

“Every Pakistan post through which infiltration takes place should be reduced to rubble by artillery fire,” blustered a retired brigadier who now mans a think-tank in New Delhi, India’s capital.

Yet despite electoral promises to be tough on Pakistan, the Hindu-nationalist government of Narendra Modi has trodden as softly as its predecessors. On September 21st it summoned Pakistan’s envoy for a wrist-slap, citing evidence that the attackers had indeed slipped across the border, and noting that India has stopped 17 such incursions since the beginning of the year.

Much to the chagrin of India’s armchair warriors, such polite reprimands are likely to be the limit of India’s response.

There are good reasons for this. India gains diplomatic stature by behaving more responsibly than Pakistan. It is keenly aware of the danger of nuclear escalation, and of the risks of brinkmanship to its economy. Indian intelligence agencies also understand that they face an unusual adversary in Pakistan: such is its political frailty that any Indian belligerence tends to strengthen exactly the elements in Pakistan’s power structure that are most inimical to India’s own interests.

But there is another, less obvious reason for reticence. India is not as strong militarily as the numbers might suggest. Puzzlingly, given how its international ambitions are growing along with its economy, and how alarming its strategic position looks, India has proved strangely unable to build serious military muscle.

Here are some basic data on the imbalance of power:

India’s armed forces look good on paper. It fields the world’s second-biggest standing army, after China, with long fighting experience in a variety of terrains and situations (see chart). It has topped the list of global arms importers since 2010, sucking in a formidable array of top-of-the-line weaponry, including Russian warplanes, Israeli missiles, American transport aircraft and French submarines. State-owned Indian firms churn out some impressive gear, too, including fighter jets, cruise missiles and the 40,000-tonne aircraft-carrier under construction in a shipyard in Kochi, in the south of the country.

Yet there are serious chinks in India’s armor. Much of its weaponry is, in fact, outdated or ill maintained. “Our air defense is in a shocking state,” says Ajai Shukla, a commentator on military affairs. “What’s in place is mostly 1970s vintage, and it may take ten years to install the fancy new gear.”

On paper, India’s air force is the world’s fourth largest, with around 2,000 aircraft in service. But an internal report seen in 2014 by IHS Jane’s, a defense publication, revealed that only 60% were typically fit to fly.

A report earlier this year by a government accounting agency estimated that the “serviceability” of the 45 MiG 29K jets that are the pride of the Indian navy’s air arm ranged between 16% and 38%. They were intended to fly from the carrier currently under construction, which was ordered more than 15 years ago and was meant to have been launched in 2010. According to the government’s auditors the ship, after some 1,150 modifications, now looks unlikely to sail before 2023.

Such delays are far from unusual.

India’s army, for instance, has been seeking a new standard assault rifle since 1982; torn between demands for local production and the temptation of fancy imports, and between doctrines calling for heavier firepower or more versatility, it has flip-flopped ever since.

India’s air force has spent 16 years perusing fighter aircraft to replace ageing Soviet-era models. By demanding over-ambitious specifications, bargain prices, hard-to-meet local-content quotas and so on, it has left foreign manufacturers “banging heads against the wall”, in the words of one Indian military analyst.

Four years ago France appeared to have clinched a deal to sell 126 of its Rafale fighters. The order has since been whittled to 36, but is at least about to be finalized.

Corruption has been a problem in the past, and observers rightly wonder how guerrillas manage to penetrate heavily guarded bases repeatedly. Lately the Indian public has been treated to legal battles between generals over promotions, loud disputes over pay and orders for officers to lose weight.

In July a military transport plane vanished into the Bay of Bengal with 29 people aboard; no trace of it has been found. In August an Australian newspaper leaked extensive technical details of India’s new French submarines.

The deeper problem with India’s military is structural.

The three services are each reasonably competent, say security experts; the trouble is that they function as separate fiefdoms.

“No service talks to the others, and the civilians in the Ministry of Defense don’t talk to them,” says Mr Shukla. Bizarrely, there are no military men inside the ministry at all. Like India’s other ministries, defence is run by rotating civil servants and political appointees more focused on ballot boxes than ballistics.

“They seem to think a general practitioner can perform surgery,” says Abhijit Iyer-Mitra, who has worked as a consultant for the ministry.