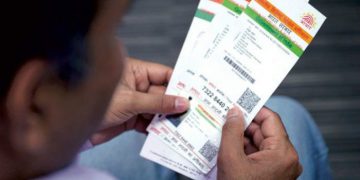 New Delhi, January 8 (The Washington Post):  Indian government agency has filed a police complaint against a journalist who exposed a possible security breach in the country’s vast biometric database that contains the personal details of more than one billion citizens, raising fresh concerns about shrinking press freedom in India.

The complaint against journalist Rachna Khaira came after she wrote an article in the Tribune newspaper saying that reporters were able to buy access to addresses, emails and phone numbers of a billion citizens for about $8. For an extra $5, reporters purchased access to a software that allowed them to print unique identity cards, which enable people to access a host of government services such as free school meals and fuel subsidies.

Khaira’s investigation created an outcry in India, as it suggests that the data of 1 billion citizens may not be protected as well as the government had claimed. The breach, the article said, exposed almost every Indian citizen to identity fraud and intrusions of privacy.

The police complaint against Khaira is the latest in clashes between India’s government and media. India ranks 136 in the 2017 World Press Freedom Index, down three points from the previous year. Killings of prominent journalists such as Gauri Lankesh and Sudip Datta Bhowmik have sparked protests around the country.

Speaking to NDTV, Khaira said the revelations in her story were just the “tip of the iceberg.”

She said: “We have almost completed our entire investigation. … We have got much more than what we have exposed so far and which we are going to bring up in the next few days.”

In response to Khaira’s story, the Unique Identification Authority (UIDAI), which oversees the biometric program, said in a letter to the Tribune’s editor: “It is the UIDAI’s position that there was absolutely no access to the biometric details (i.e. fingerprints and iris scans) of any individual whatsoever on the said UIDAI portal.”

India’s minister of law, Ravi Shankar Prasad, however, suggested that the government did not support the Unique Identification Authority’s heavy-handed approach to the journalist’s investigation.

In a tweet, Prasad wrote: “Govt. is fully committed to freedom of Press as well as to maintaining security & sanctity of #Aadhaar for India’s development. FIR is against unknown. I’ve suggested @UIDAI to request Tribune & it’s journalist to give all assistance to police in investigating real offenders.”(sic)

And in a turnaround late Monday, local time, the Unique Identification Authority said it would work with the Tribune to identify wrongdoing.

“UIDAI is committed to the freedom of Press. We’re going to write to @thetribunechd & @rachnakhaira to give all assistance to investigate to nab the real culprits. We also appreciate if Tribune & its journalist have any constructive suggestion to offer.”

In the light of the tweet, it was unclear whether the agency would continue with its police complaint against Khaira.

The governing Bharatiya Janata Party (BJP) had earlier tweeted from its official account that Khaira’s report was “fake news.” In another tweet, it quoted tech titan Nandan Nilekani, who created the biometric program known as Aadhaar, as saying: “The security concerns raised around Aadhaar are complete nonsense, figment of imagination and a deliberate attempt to create an alarmist talk.”

Prime Minister Narendra Modi’s government champions the biometric database as a way to tackle welfare fraud and corruption in India. In the past year, the Modi government has tried to make Aadhaar cards mandatory to access a number of essential public services but was held back by activists who filed cases against the government in the Supreme Court.

In the meantime, government officials have visited remote parts of the country to encourage people to sign up for the biometric database voluntarily. The efforts have worked — more than 1 billion Indian citizens have signed up. However, thousands are still not on the database.

India’s Editors Guild said in a statement that the Unique Identification Authority’s decision to pursue criminal action against the journalist was “unfair, unjustified and a direct attack on the freedom of the press.”

In a statement, it said, “Instead of penalizing the reporter, UIDAI should have ordered a thorough internal investigation into the alleged breach and made its findings public.”

Tribune Editor Harish Khare issued a statement saying, “Our story was in response to a very genuine concern among the citizens on a matter of great public interest. We regret very much that the authorities have misconceived an honest journalistic enterprise and have proceeded to institute criminal proceedings against the whistle blower.”