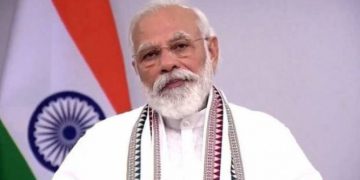 Colombo, July 4 (newsin.asia): Buddhism forms one of the most important civilisational links between India and Sri Lanka. Addressing the Dharma Chakra Day celebrations in New Delhi on Saturday, Indian  Prime Minister  Narendra Modi said that the world fights extra-ordinary challenges. To these challenges, lasting solutions can come from the ideals of Lord Buddha. They were relevant in the past, are relevant in the present and will remain relevant in the future.

Prime Minister Modi had visited Sri Lanka during the 2017 International Vesak Day celebrations as Chief Guest. To further strengthen the ties of these shared bonds,

The panelists discussed the significance of the Buddha Dhamma for global well-being, particularly considering the current challenges of the COVID-19 pandemic. Highlighting the importance of Esala Full Moon Poya day, when Lord Buddha gave the First Sermon, the Dhammacakkappavattana Sutta, at Sarnath, India, the scholars stressed upon the need for compassion and kindness towards each other, and suggested that only through right physical, verbal, and mental actions, as prescribed by Lord Buddha, one can ensure global well-being.

The scholars highlighted the deep socio-religious, cultural and historical relationship between Sri Lanka and India that dates back to more than 2500 years. Esala Full Moon Poya Day being one of such festivals, which reiterate this relationship. It was on this Poya Day Arittha, the nephew of King Devanampiya Tissa, along with 55 others were ordained by Arahant Mahinda Thera, the son of Emperor Ashoka of Magadh, India. This event marked the establishment of Buddha Sasana in Sri Lanka. Also, it was on Esala Poya Day, the Most Venerated Tooth Relic of the Buddha was brought to Sri Lanka from Kalinga, India.

The scholars appreciated the initiative of Swami Vivekananda Cultural Centre (SVCC), High Commission of India in Sri Lanka, and requested for many such discussions between scholars of Sri Lanka and India, as well as with other parts of the world.

The panel discussion was webcast live on the Facebook page of Swami Vivekananda Cultural Centre, Colombo.