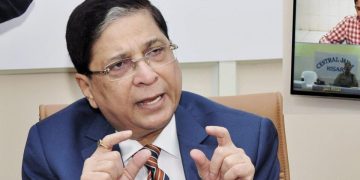 New Delhi, April 20 (the Print.in): Indian Opposition parties led by the Congress on Friday moved a motion of impeachment against Chief Justice of India Dipak Misra. This is the first time in history that such a move has been initiated against the top judge of the apex court. The motion has five points which are enumerated at the end of the story.

Opposition leaders said the motion had been moved because “his conduct is unbecoming of a person holding the office” of Chief Justice of India.

Senior Congress leader Ghulam Nabi Azad told a press conference that the impeachment motion had been moved on “five grounds of misbehavior.”

Azad was speaking on behalf of a group of seven opposition parties who met the Chairperson of Rajya Sabha, Venkaiah Naidu, to submit the motion.

“We sought a meeting a week ago,” Azad repeatedly stressed to clarify that the move was not prompted by the Supreme Court’s ruling in the judge Loya case Thursday.

The meeting with Naidu reportedly lasted for about 40 minutes but the merits of the impeachment motion were not discussed, it is learnt.

Azad said that 71 parliamentarians had signed the impeachment motion but at least seven have since retired since the conversation on impeachment began in November last year.

“We wish this day had never come. An independent judiciary is imperative for a democracy,” senior advocate and Congress leader Kapil Sibal said as he read out the impeachment motion.

Sibal added that although three months have passed since, critical questions raised by four senior judges of the court have not been resolved, referring to the 12 January press conference held by Justice Jasti Chelameswar and three other judges.

Although the CJI is one among equals on the judicial side, he has vast powers on the administrative side. Sibal stressed that “since Dipak Misra has been appointed CJI, several questions have been raised on how he has conducted his affairs.”

“We hope that a thorough enquiry will be held so that truth alone triumphs,” he said.

The impeachment motion lists the following five allegations against Misra: