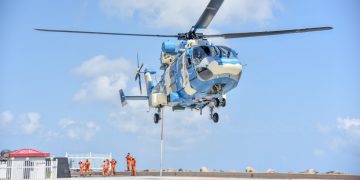 Indian military base in the Maldives is not a top priority for New Delhi: Report

Indian military base in the Maldives is not a top priority for New Delhi: Report Male, December 29 (EurAsia Times): For now, India has not sought building of any kind of military facility in return for granting $1.4 billion assistance to the Maldives, official sources said on Thursday. The sources said there was no “quid pro quo” in granting the financial assistance to the Maldives by India during Maldivian President Ibrahim Mohamed Solih’s visit here 10 days back.

There were speculations that Delhi was keen to set up of a military base in the Maldives in exchange for the financial assistance to Male which is reeling under financial crisis.

The Maldives is faced with mounting Chinese debt and India on December 17 announced a $1.4 billion financial assistance following talks between Prime Minister Narendra Modi and Solih.

India has an extensive defence agreement with the Maldives and New Delhi has consistently considered Male as part of its security grid, almost like Bhutan. According to India-Maldives defence pact, India will permanently base two helicopters to enhance its surveillance capabilities quickly respond to any threats.

The Maldives has coastal radars on only two of its 26 atolls. India will help set up radars on all 26 for seamless coverage of approaching vessels and aircraft. The coastal radar chain in the Maldives will be networked with the Indian coastal radar system. India has already undertaken a project to install radars along its entire coastline. The radar chains of the two countries will be interlinked and a central control room in India’s Coastal Command will get a seamless radar picture.

The Indian Coast Guard (ICG) will carry out regular Dornier sorties over the island nation to look out for suspicious movements or vessels. The Southern Naval Command will overlook the inclusion of Maldives into the Indian security grid.

Military teams from the Maldives will visit the tri-services Andaman Nicobar Command to observe how India manages security and surveillance of the critical island chain. Ekuverin, an annual joint military exercise (between India and Maldives) will be conducted every year India and Maldives. The exercise aims to enhance the interoperability between the Indian Army and the Maldives National Defence Force in order to effectively undertake counter-terrorism operations.

India already has exclusive and extensive defence cooperation with the Maldives (unlike any other country) and there is no immediate requirement for India to create a military base in the country. However, India will now ensure to keep-off the Chinese from India’s backyard and ensure the Male gets continuously pampered by New Delhi.