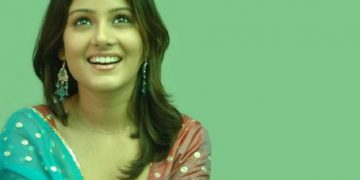 Colombo, April 3 (newsin.asia): Archanna Guptaa is an effervescent personality. The 28 year old Indian model and actress belonging to a provincial town in North India had breezed into the snooty world of modeling in New Delhi and held her own there in the face of fierce competition. She then seamlessly slipped into the film industry in South India to do as many as eleven films.

She had achieved all these single handedly, with no backing other than her natural talent,  willingness to seize opportunities, eagerness to learn and tons of chutzpah.

“There was such a good demand for me in Delhi’s modeling circuit  that I once modeled for two rival brands simultaneously ! ” the chirpy young lady from Agra said.

Her mobile face,  a ready smile, and an innate ability to dance got her offers galore. Soon, portfolios done by a leading photographer attracted the attention of a South Indian film maker looking for a fresh face. This led her to Hyderabad, Bangalore and Chennai where she did most of her 14 films to date.

With this kind of record, Archanna is justifiably  confident of bagging a role in a Bollywood commercial movie .But being down to earth, she has not pinned her hopes only on Bollywood.

“ I am all for doing commercial Hindi films. I enjoy all kinds of films and all kinds of roles, from Bollywood extravaganzas to art films. Variety gives me opportunities to learn about new  things, new personalities and new social settings. I believe in the dictum: one ceases to live when one ceases to learn,” Archanna said  convincingly.

Asked how important money would be for her in her career given the fact that regional language films pay less than Bollywood films, she hesitatingly said: “Payment is secondary, what is important is the role, the character I am playing. I love to do various characters.”

Asked how she got into the film industry from a way off place like Agra, which is a nondescript town though home to the magnificent Taj Mahal,  Archanna said that she had a fascination for films and the film world since childhood.

“I was a big fan of Madhuri Dixit’s. I was good at dancing and I  wanted to dance like Madhuri whose face was mobile and movements fluid. But while dancing was my passion, I also wanted to act. I wanted to be a film actress,” Archanna said.

As in the case of many budding actresses, she first entered modeling and had a portfolio put together by a renowned photographer,  which quickly caught the attention of a Telugu producer who was making the film Andamaina Manasulo.

“The Telugu language was totally alien to me. I had never heard the language before but I took the film offer as a challenge. I love challenges. The food in the South was different but then I like to experiment with cuisine. Where ever I go, I would want to try out the area’s special dishes,” she said.

And sure enough, the film industry in the South accepted her fully.

Archanna’s next film was in Kannada and the hero was the established Kannada actor Ganesh. Three more Kannada films Lift Kodla, Circus and Achchu Mechchu followed. In 2013 came three Malayalam films in a row, Rasputin, Hangover and Kaanchi.

By 2015, Archanna  had done 14 films mostly in the South Indian languages, including  the Tamil film Maasi opposite the action hero Arjun.

But Bollywood has not beckoned her yet, though she has done two Hindi films Saanncha (an art film) and Queen’s Destiny of Dance.

In the meanwhile, something totally unexpected happened. A serendipitous offer came from Serendib – Sri Lanka.

A friend from Sri Lanka had suggested that she take a shot at the Sri Lankan film industry, known for making quality films which do the rounds in the international film festival circuit regularly.

Archanna suddenly saw new vistas opening for her. And the vista was truly amazing – a historical  film based on the life of Sri Lanka’s  19 th.Century Robin Hood, Deekirikevage Saradiel.  The film titled Saradiel  is being made by the island nation’s only Hollywood Director Chandran Rutnam.

The 69 year old director who is still very active was sounded about Archanna’s interest. But he couldn’t figure out where in the film she would fit. While mulling the possibilities,  Archanna paid him a surprise visit. She had air dashed to Colombo just to see him and talk to him about the film and what she could do in it.

Chandran was impressed with the young lady’s drive and energy, the sparkle in her facial expressions and her ability to dance. But he had no immediate role for her. So he did the next best thing – undertook to write a suitable role for her!

Saradiel is bound to be a hit given the fact that it is about a legendary outlaw  who was a Robin Hood for the poor and a hardened and dangerous criminal for the British rulers of Ceylon, a theme which would go down well with Sri Lankans constantly under pressure from interfering foreign powers.