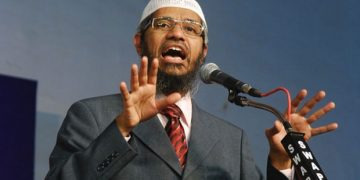 Indian Govt thinks if he is demonized 200 million Muslims can be easily cowed, says Zakir Naik

Indian Govt thinks if he is demonized 200 million Muslims can be easily cowed, says Zakir Naik New Delhi, September 10 (IANS):  Controversial Islamic preacher Zakir Naik has warned that a ban on his Islamic Research Foundation (IRF) will set a precedence for “unspeakable injustices” against Indian Muslims.

In an open letter to the government and fellow Indians, Naik said he had not done anything wrong to be projected as an enemy of the Indian State and that alibis were being sought to ban the IRF.

“If IRF and I are banned, it will be the biggest jolt to the country’s democracy of recent times,” he said.

“I do not say this just for me but because this ban will set a precedence of unspeakable injustices against the 20 crore Muslims of India.”

“Let’s not be gullible enough to assume that there isn’t a deeper agenda behind this vicious campaign.

He said a ban on his organization would “embolden and encourage every fringe element in the country to do as they please”.

Describing himself as the “biggest name and the most popular figure” among Muslims, Naik said: “If you can bring down and demonize this figure of the community, the rest becomes a cakewalk.

“That, I think, is what is happening. It may sound like a conspiracy theory, but I honestly cannot find any other plausible reason.”