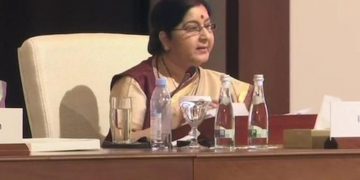 Abu Dhabi, March 1 (Hindustan Times): The Indian External Affairs Minister Sushma Swaraj on Friday raised a pitch at the Organization of Islamic Cooperation meet to build pressure on the countries that support terror outfits and fund them. Swaraj said the OIC must tell such nations to dismantle terror infrastructure.

“If we want to save the humanity then we must tell the states who provides shelter and funding to the terrorists, to dismantle the infrastructure of the terrorist camps and stop providing funding and shelter to the terror organizations, based in that country,” said Swaraj in her speech as a guest of honour at the OIC foreign ministers conference.

“The fight against terrorism is not a confrontation against any religion. It cannot be,” said Swaraj quoting from holy books Quran, Guru Granth Sahib and Rig Veda, adding, “Terrorism and extremism bear different names and labels. It uses diverse causes. But in each case, it is driven by distortion of religion, and a misguided belief in its power to succeed.”

This was the first instance when an Indian external minister was invited to the OIC conference. Invitation to India saw Pakistan skipping the event with foreign minister Shah Mehmood Qureshi saying in the joint session of National Assembly of Parliament that “India has no legal or moral ground to be present at the meeting.”

Swaraj did not mention the name of Pakistan during her address to the OIC conference while calling for a concerted action to mount pressure on the countries supporting terror outfits. But she said the reach of terror is increasing and we are seeing the terrible face of terror in.

This comes at a time when India is reaching out to the international community to isolate Pakistan after a terror attack in Jammu and Kashmir’s Pulwama on February 14 when 40 CRPF jawans were killed. Pakistan-based terror group, Jaish-e-Mohammed claimed responsibility for the Pulwama attack.

Nearly two weeks later, Indian Air Force carried out on Tuesday a strike at a Jaish terror camp in Khyber Pakhtunkhwa province of Pakistan. India said it was conducted on the basis of “credible” intelligence input that the Jaish was planning more terror attacks in India.

Pakistan responded to the strike at Jaish terror camp by violating Indian airspace as Pakistan Air Force crossed the Line of Control and attempted to target Indian military installations on Wednesday. Indian Air Force foiled the PAF attempt and shot down one F-16 fighter jet.

The IAF lost one MiG 21 Bison that was being flown by Wing Commander Abhinandan Varthaman, who crash-landed on the other side of the LoC in Pakistan-occupied Kashmir. He was taken into custody by the Pakistan Army.