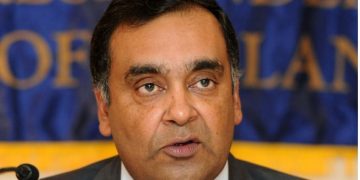 Colombo, August 15 (NIA) : The Indian High Commissioner in Sri Lanka ,Y.K.Sinha, has rebutted the contention of some Sri Lankan opinion makers that India has never been a single nation and that the “India” of today is nothing but a creation of British colonialists. He also deprecated a tendency among a section of Sri Lankans to see a red herring in every act of Indian goodwill.

Addressing a gathering of Indians and Sri Lankans at India House here on Monday on the occasion of India’s 69 th.Independence Day, Sinha said that while India may be a new “modern nation state”, it is by no means a “new country”.

It is an ancient land, he said. India has been known since millennia, not just as a geographical entity, but as ‘Bharatvarsh’, signifying unity, he added.

“India has existed since the times of Vedas and Upanishads denoting oneness and unity. The great Greek traveler, Megasthenes, had visited the court of Emperor Chandragupta Maurya in 4th Century BCE and had penned a work titled Indica extolling the glory of India,” Sinha pointed out and added that the term “India” was derived from the Greek work “Indica”.

Denying that all Sri Lankans think that India is not a single entity and that it is an artificial creation of the British colonial power, Sinha said that the concept of India is “well understood in Sri Lanka”, as both countries share civilizational bonds.

He reminded the minority of doubting Sri Lankans that it was a fact that Arahat Mahinda, who brought Buddhism to Sri Lanka, come from “Jambudvipa”, which was “India”.

In this connection, he recalled that on the last Poson Poya day, to mark Arahant Mahinda’s meeting with the Sri Lankan king Devanampiya Tissa, he had been invited to speak on India’s Buddhist links with Sri Lanka in the presence of the President of Sri Lanka, Mithripala Sirisena.

The envoy also said that an International Buddhist Conference will be hosted by Government of India at the holy Buddhist sites of Sarnath and Bodh Gaya in October this year to highlight the deep and abiding cultural and spiritual ties that bind people in both countries.

“These common links form the strong underpinnings of modern bilateral relations, which have significantly expanded and progressively evolved to cover all areas of mutual and contemporary relevance,” the envoy said.

The High Commissioner noted that economic ties are at the core of India’s renewed engagement with the world. He invited India’s neighbors, especially its close neighbor Sri Lanka, to be part of a collective growth story. He said that it was India’s hope that Sri Lankan businesses will take advantage of their proximity to India and enter into economic and technical cooperation with Indian companies.

He stated that the “motivated and mischievous campaign of disinformation” against the proposed Economic and Technical Cooperation Agreement (ETCA) with India needs to be countered by genuine debate and discussion among stakeholders in Sri Lanka.

The envoy regretted that some in Sri Lanka have the habit of looking a gift horse in the mouth and seeing a “red herring” in everything done by India. Referring to the false propaganda about the Emergency Ambulance Service now being jointly run by the Sri Lankan Health Ministry and a well known Indian firm, with an Indian grant of US$ 7.55 million, he  said that the Sri Lankan Prime Minister, Ranil Wickremesinghe, had said the right thing when he described the gift of 88 state of art ambulances as a “pin kama”or meritorious deed of the highest order as per the teachings of Buddhism and  Hinduism .

On Indo-Sri Lanka development cooperation, the envoy said that India will not rush through collaborative projects but do them at a pace desired by Sri Lankans.

India has committed over US$ 2.6 billion in development assistance to Sri Lanka, with over US$ 435 million in outright grants. The flagship housing project being funded by India is progressing at an impressive speed with over 45,000 houses constructed till date. The third phase, to construct 4,000 houses in the Central and Uva Provinces through an innovative community-driven approach, was launched in the last week of April 2016.