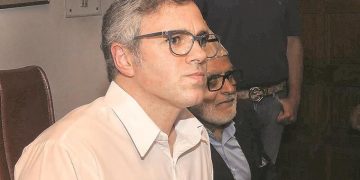 Srinagar, March 10 (Indian Express): Former Jammu and Kashmir Chief Minister and National Conference leader Omar Abdullah described Election Commission’s decision to not hold assembly elections in the state as “surrender to Pakistan, to militants and to the Hurriyat”.

“In light of the failure to conduct assembly elections on time in J&K I’m retweeting my tweets from a few days ago,” tweeted Omar Abdullah. “PM Modi has surrendered to Pakistan, to the militants & to the Hurridyat,” he wrote, adding “Well done Modi Sahib. 56-inch chest failed. #slowclap”.

Abdullah criticising the prime minister said that Balakot and Uri are not symbols of the Modi’s handling of national security, and termed it as “the mess he has made”, and added, “the abject surrender to anti -India forces is crying shame”.

Continuing his attack on the PM Modi, he further said in his tweet, “With the amount of international attention elections in J&K attract”, I never thought PM Modi would be willing to confess his failure on a global stage but we all make mistakes & that was mine.”

In another tweet, he asked, “What happened to @rajnathsingh’s assurance to Lok Sabha & Rajya Sabha as well as to the all-party meeting recently in Delhi that all forces would be made available for simultaneous polls?”

“First time since 1996, Assembly elections in J&K are not being held on time. Remember this the next time you are praising PM Modi for his strong leadership,” he wrote.

In 2014 we had Lok Sabha elections on time & assembly elections on schedule even after the most devastating floods. Shows how badly the BJP & earlier the Bharatiya Janata Party-Peoples’ Democratic Party (BJP-PDP) mishandled J&K,” Omar said in another tweet.

(The feature picture at the top is that of Omar Abdullah, National Conference leader and former Chief Minister of Jammu and Kashmir)