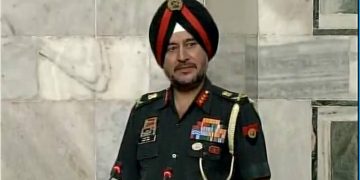 Indian army says it will retaliate at a time and place of its choice, not now when Pakistan is prepared

Indian army says it will retaliate at a time and place of its choice, not now when Pakistan is prepared New Delhi, September 19 (NIA):  The Indian Army has said that it will strike across-border in Pakistan at a time and place of its choosing, a day after Pakistan-based Jaish-e-Mohammad terrorists attacked the Uri army camp killing 18 Indian soldiers. But analysts wonder if any of the existing options is guaranteed to work

“The Indian Army has displayed considerable restraint while handling the terrorist situation both along the Line of Control and in hinterland. However, we have the desired capability to respond to such blatant acts of aggression and violence as deemed appropriate by us,” the Director General of Military Operations Lt.Gen.Ranbir Singh said in a statement to the media at the South Block.

“We reserve the right to respond to any act of the adversary at the time and place of our own choosing,” he added.

The present DGMO’s remark is identical to the statement given by then Army chief Gen Bikram Singh in 2013 after the January 8 violation of the Line of Control(LoC) in which one jawan was beheaded and the other had his throat slit, The Hindu noted in its report on Monday..

His remark was identical to the statement given by then Army chief Gen Bikram Singh in 2013 after the January 8 violation of the Line of Control(LoC) in which one jawan was beheaded and the other had his throat slit.

“We’ll give them a fitting reply…we will respond at a time and place of our choosing,” Gen.Bikram Singh had said.

However, top Army sources told PTI that action will be taken but nature and timing of it will not be revealed at the moment.

“There should be an element of surprise which is not there at the moment as Pakistan will be prepared for a retaliation. The Indian Army of course has its strategy in place and will do its job,” the sources said.

The Hindu’s diplomatic correspondent, Suhasini Hyder examines some of the options touted in the public domain.

– Send envoys to major world capitals, gathering support for action against Pakistan for sheltering Jaish-e-Mohammad and Lashkar-e-Toiba amongst other terror groups

The first few options have been tried before, such as after the Parliament attack in 2001. The truth is diplomatic pressure works only when India and Pakistan have talks ongoing that are making progress. At present, talks have been called off and there is no dialogue process.

In terms of the international galvanization, India can make some headway, given the worldwide intolerance for terrorism, fear of Islamist radicals and ISIS spreading, as well as general mistrust of Pakistani actions due to Afghanistan. Even so, it is a long and tough haul, and given the difficulties India has had with moving the U.N. on the Comprehensive Convention on International terrorism, doesn’t augur much immediate hope.

Appealing to the international community also brings with it the danger of “internationalizing” the Kashmir dispute, which India has been trying to resolve internally and bilaterally. The Balochistan card will only work, say experts, if India is consistent and serious about supporting the groups, which could also bring international censure, given the U.S. maintains it supports Pakistan’s claim on Balochistan.

– Snap all trade ties with Pakistan, suspending transactions across Wagah and Uri

– Ban all Pakistani imports to India

– Appeal to other countries to reduce economic activity with Pakistan

At present India and Pakistan have have a fairly small direct formal trade of $2.3 billion (Informal trade is about $4.7 bn). Breaking off ties will affect the people of Kashmir the most, as they use the Line of Control (LoC) for fruit trade. The sanctions process will require a U.N. Security Council resolution, and that will most definitely be blocked by China, which has also blocked terror sanctions of even LeT/JeM entities like Lakhvi and Masood Azhar.

Military (overt and covert)

– Increase patrolling and scale of fire at Line of Control

While the clamou for a military strike post Uri is high, India’s armed forces have several considerations to make. Uri is no doubt the worst attack on the security forces in terms of casualties, but it is one of more than 20 such attacks on security force bases in Jammu and Kashmir in the past few years (Tangdhar, Maheshwar, Uri 2014, Kathua, Pathankot to name a few), and more foiled attempts and infiltration.

Many experts also feel that the “window” for a strike visibly shrinks with each passing hour after an attack, as the international community begins to exert pressure to India to show restraint. A military operation of any kind will no doubt lead to counter strikes from Pakistan, whose military is already under pressure, and drumming up the “threat perception” from India.

India will need to be clear about having clear targets and coordinates of terror camps and terror leaders, as any civilian casualties will spark further repercussions.

Finally a thorough investigation of all the security lapses that led to the Uri attack, infiltration routes, as well as defense preparedness would need to be studied in order to secure against future strikes.

It is for this reason that in the only official statement made on India’s options so far, General V.K.Singh said on Monday that, “Having seen the Army closely, I feel, it needs to be analyzed as to what happened there…It needs to be investigated how the incident took place and what were the lacunae.”

“From the Army’s side, alertness is required. The Kashmir situation needs to be thought about. Action is to be taken without getting influenced by emotions, anger. It has to be taken coolly and with proper planning.”