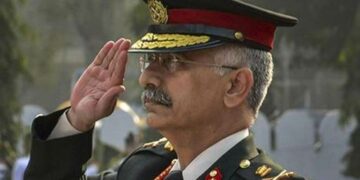 Colombo October 12: The Chief of the Army Staff of the Indian Army (COAS) General Manoj Mukund Naravane,  at the invitation of his Sri Lanka’s counterpart, General Shavendra Silva, Chief of Defence Staff and Commander of the Army, together with a five-member delegation, including his spouse, Mrs.Veena Naravane, will be in Sri Lanka  on a five-day long goodwill tour beginning on Tuesday.

Gen. Naravane is scheduled to pay courtesy calls on President Gotabaya Rajapaksa, Commander-in-Chief of the Armed Forces, the Prime Minister Mahinda Rajapaksa, State Minister of National Security, Secretary to the Ministry of Defense, Gen. Kamal Gunaratne (Retd), Secretary to Ministry of Foreign Affairs, the High Commissioner of India, the Chief of Defense Staff and Commander of the Army, General Shavendra Silva, and Commanders of the Navy and Air Force.

On Thursday (14), the visiting Indian Army Chief grace the Gajaba Regiment Regimental Day commemorative ceremonials at Saliyapura is to be honored in a parade before he joins the presentation of driving and firing simulators at the School of Sri Lanka Army Service Corps at Anuradhapura and witnesses the final demonstration of the ongoing bilateral Exercise ‘Mitra Shakti’ at the Maduru Oya Special Forces Training School.

The visiting COAS is to be honored at the Army Headquarters in a colorful Guard Turnout plus in an elegantly-dressed special Guard of Honor salute soon after his arrival at the Army HQ on Wednesday (13) before he calls on his host, General Shavendra Silva at the Commander’s office for a formal exchange of views. He is also scheduled to pay courtesies to the General Kamal Gunaratne (Rtd), Secretary Defense at the Ministry of Defense.

Just a few hours after the Indian Army Chief’s arrival in Sri Lanka he is expected to pay floral tributes to the memory of IPKF War Heroes at the monument in Sri Jayawardenepura before he proceeds to the Army Headquarters.

The COAS will also make a formal visit to the Defense Services Command and Staff College (DSCSC) at Sapugaskanda towards the end of his itinerary in Sri Lanka and meet undergraduates.

General Shavendra Silva, accompanied by his spouse Mrs Sujeewa Nelson, President, Army Seva Vanitha Unit, will receive the visiting India’s Army Chief and his spouse, Mrs Veena Naravane, together with his delegation to a red carpet welcome at the Colombo Bandaranaike International Airport.

The Army Seva Vanitha Unit has meanwhile organized a separate reception and a programme for Mrs Veena Naravane during her stay in Sri Lanka.