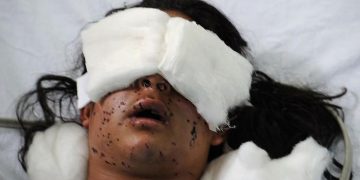 New Delhi, September 5 (NIA): Baffled by the strong public reaction to the use of pellet guns against stone throwing mobs in Kashmir since July 9, the Indian government last Saturday decided to use chilli-based shells to control crowds which could not be controlled either by a baton charge or tear gas shells.

Pelargonic Acid Vanillyl Amide (PAVA), also called Nonivamide, is present in chilli peppers, but is commonly manufactured synthetically. Nonivamide is used (under the name PAVA) as the payload in “less-lethal munitions” such as the Fabrique Nationale Herstal FN 303  or as the active ingredient in most pepper sprays.

As many as 1000 chilli shells were dispatched to the Kashmir Valley over the weekend.

Since early July, nearly 4,000 people have been injured and one killed by pellet guns as India grapples with the biggest protests in Kashmir since 2010.

More than 100 people have gone fully or partially blind after being hit in the eye with the pellets, while hospitals said they had treated more around 600 people for eye injuries.

Muslim Kashmiris are fighting for independence or union with Muslim Pakistan. More than 50,000 people have been killed in the conflict since trouble erupted in the late 1980s..