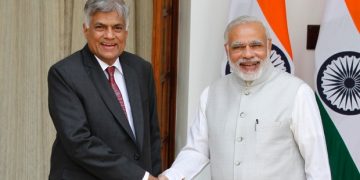 Colombo, August 27 (NIA): The first round on talks between India and Sri Lanka on the proposed Economic and Technical Cooperation Agreement (ETCA) which took place here recently, proved to be bumpy with the Sri Lankan and Indian delegations not being able to see eye to eye on many matters, according to reliable sources.

The Sri Lankan delegation came up with many do’s and don’ts based on the political situation in Sri Lanka which is hostile to ETCA. But the Indian side found the demands too exacting as there is a point beyond which India cannot disregard its own interests.

India’s view is that the Sri Lanka side will first have to sort out its problems with local interest groups which are up in arms against the very idea of an ETCA with India. While the general impression in Sri Lanka is that the idea of ETCA emanated in India and that India is trying to thrust it down Sri Lanka’s throat,  the fact is that ETCA was proposed by the Sri Lankan Prime Minister, Ranil Wickremesinghe, and the Indians just went along as this would be in Sri Lanka’s interest.

In India’s view, ETCA would help solve some of Sri Lanka’s financial problems. Indian investments that ETCA would bring in, could help Sri Lanka get out of the debt trap in which it is now. But India, as such, does not stand to gain much from ETCA given the smallness of the Sri Lanka’s domestic market and its limited export potential.

In the absence of a political consensus on ETCA in Sri Lanka, talks on it are likely to drag on and Colombo may not be able to reach its target of signing it by year end.

Associations of professionals in Sri Lanka, which have been in the forefront of the agitation against ETCA, have told the government that it must first formulate and get through parliament, a “National Trade Agreements Policy” laying down the parameters necessary to safeguard the interests of Sri Lankans. While the government says that it is working on such a policy, it has already started official level talks with India on ETCA. The professionals opposes this move and have virtually withdrawn from talks with the government.

The Government Medical Officers’ Association (GMOA), which fears intrusion of Indian doctors if ETCA is signed, has presented memoranda to the Buddhist Sanghas or organizations of Buddhist monks and also the Leader of the Opposition R.Sampanthan. The GMOA and other professional organizations are counting on the President of Sri Lanka, Maithripala Siriesena, to oppose ETCA or at least see that their concerns are addressed in the agreement.

Sri Lankan professionals fear that their Indian counterparts will come to work for lesser salaries and thereby drive them out of jobs. They also fear that Indian professionals with lesser or dubious qualifications will flood Sri Lanka and bring down standards.

They have no faith in the contention of the Indian and Sri Lankan governments’ contention that “movement of natural persons” will not be allowed except in IT services and ship building. They cite the Indian government’s ability to negotiate more aggressively than the Sri Lankans as the reason for fearing that the Indians will swing more concessions than what is envisaged now

While ETCA is favored by a few top people in the Ranil Wickremesinghe government, the Executive President of Sri Lanka, Maithripala Sirisena, has neither supported nor opposed it, keeping his options open. Being more of a political person than Prime Minister Wickremesinghe, he may go the way the public sentiment goes, in the months to come. It is reliably learnt that efforts are being made to explain to him the benefits of ETCA but it is not known if these efforts have borne fruit.