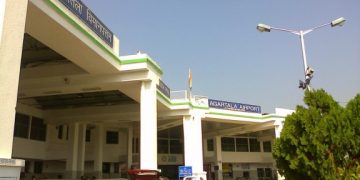 Dhaka, August 2 (The Daily Star): India has sought a piece of Bangladeshi land in Brahmanbaria to upgrade and expand the Agartala airport in Tripura state, according to Zanandra Nath Sarker, Joint Secretary in the Bangladesh Civil Aviation and Tourism Ministry .

The Agartala airport is set to become the third international airport in India’s northeastern region by the end of this year or early next year.

However, Sarker added that India has not yet sent a detailed proposal in this regard, though it had made a verbal request for the land sometime in March.

The detailed proposal should explain exactly where and how India wants the land, how much land is required and the ground on which it will be used, he said..

Once India submits the technical proposal, the civil aviation ministry will sit with the foreign ministry to check whether Bangladesh’s laws have any provision to allow any other country to use Bangladeshi land, Sarker said.

When contacted Home Minister Asaduzzaman Khan Kamal said he knew about  such a proposal from India but any decision in this regard would come from the Prime Minister ,Sheikh Hasina.

“But my opinion is why should I give any Bangladeshi land to India? There should be no question about it,” he told The Daily Star.

Expansion and upgrading the Maharaja Bir Bikram Airport is part of AAIs Rs 3,400 crore project for the upgrading various airports in India’s northeastern region that has historically been underdeveloped, the newspaper said.

Tripura Transport and Tourism Minister Pranajit Singha Roy said following the completion of the project, flights between Agartala and Dhaka, as well as other Bangladeshi cities like Chattogram and Sylhet, would be operated.

“The state government had already provided 72 acres of land to the AAI for construction of the new terminal building, runway and other necessary infrastructure,” he said.

According to AAI officials, the Agartala airport, which is located 20 km north of the capital city of Agartala, sits just along the Bangladesh border. It handles on an average nine lakh passengers per year, The Economic Times reported.

Asked about the matter, Dhaka University International Relations’ Prof Dr Imtiaz Ahmed said there were some airports that fall on the borders of two or even three countries. One of them, for example, is Geneva International Airport situated both in Switzerland and France.

“However, the context of South Asia is not comparable to that of Europe. It is because of the structures of immigration, currency and politics,” he told The Daily Star.

There are the questions of sovereignty, security and political implications, he added. He, however, said if Bangladesh is to provide the land for the Agartala airport, its government must address the issues of security, sovereignty and commercial viability.

“We need to see if both Bangladesh and India can jointly handle the airport,” he further said.

Dr Rozana Rashid, associate professor of international relations at Dhaka University, said though Bangladesh and India are good friends, a good number of Bangladeshi people have some level of anti-India sentiments.

“The government needs to be very cautious before taking any decision about the matter,” she said.

Aviation expert Kazi Wahedul Alam, meanwhile, said if it benefits the Bangladeshi people and the country economically and trade-wise, allowing India to use Bangladesh’s land for the purpose can be beneficial. But, sovereignty and security issues must be addressed, he cautioned. .

However, the terms and conditions must be very clear so that they do not lead to any problem in future, he said.