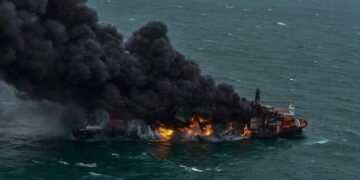 Colombo, May 25 (newsin.asia): India promptly responded to an emergency request by the Sri Lanka Navy and deployed multiple assets to douse the fire on MV X Press Pearl off Colombo on 25 May 2021.

The Indian High Commission said in a release that the assets sent included vessels Vaibhav, Vajra and Samudra Prehari of the Indian Coast Guard and the Tug Water Lilly by Director General, Shipping in addition to a Dornier aircraft for aerial reconnaissance.

The assistance of the Government of India for firefighting as well as pollution control was sought by Sri Lanka Navy at 1200 hrs on 25 May 2021.  This came in the wake of an onboard explosion on 25 May 2021 on the Singapore-flagged MV X Press Pearl.

Immediately upon receiving the request, relevant authorities in India were alerted and assets were deployed expeditiously. While the Dornier aircraft reached Colombo at around 1600 hrs on 25 May 2021, the first Vessel would reach around 1900 hrs, the release said.

India has the tradition of being the first responder during crises in Sri Lanka. It may be recalled that a potentially huge oil spill was averted with assistance from India after MT New Diamond with 200,000 metric tons crude oil on board caught fire off Sri Lanka’s Eastern Coast in September 2020. Three Indian Naval Ships rushed with assistance following the floods in Sri Lanka in May 2017, the mission said.

According to The Maritime Executive, Sri Lankan authorities responded on May 20 to a distress call for container fire aboard a feeder containership reported to be carrying dangerous chemicals. The vessel was anchored outside the port of Colombo awaiting terminal space on a trip from the Middle East.

The 37,000 dwt vessel X-Press Pearl arrived off Colombo on May 19 and anchored approximately 9.5 nautical miles northwest of the harbor. She is loaded with 1,486 containers including 25 tons of Nitric Acid, a corrosive chemical used in the production of fertilizers, explosives, and for oxidizing metals. The cargo is also reported to include cosmetics and other potentially dangerous chemicals.

The Sri Lanka Navy dispatched two vessels and a fast boat to the scene of the fire. They were joined by a tug from the Sri Lanka Ports Authority. Pictures from the scene showed the tug spraying water on the fire, assisting the crew onboard in the firefight.

Reports indicated that the fire had been brought under control, but the firefighters were standing by in case the fire reignited. Navy officials said that there remained hot spots aboard the vessel which could cause the fire to flare up.

The vessel’s 25-member crew includes Philippine, Chinese, Indian and Russian nationals. The vessel had left the Hazira port in India on May 15 and was on its way to Singapore via Colombo.

According to The Maritime Executive, a team from the Sri Lanka Navy and Ports Authority which boarded the containership overnight to inspect the fire, suspected that the fire was caused by a chemical reaction or possibly mis-declared cargo. The smoke from the fire was in part due to the chemicals mixing with the rain and later the water from the tugboat.

The vessel has a crew of 25 aboard and the authorities reported that the crew was safe and had not experienced any injuries.

The 610-foot-long containership was recently commissioned after having been delivered to X-Press Feeders in February 2021. It is registered in Singapore and operates on the company’s Straits Middle East service traveling between Qatar and the UAE to India, Sri Lanka, Malaysia, and Singapore. The X-Press Pearl had departed Hazira, India on May 15 and was heading eastbound on the last leg of a voyage from the Middle East.

This is the second reported fire in recent months aboard a vessel operated by X-Press Feeders. In September 2020, the Indian Coast Guard, provided assistance to the 10,600 dwt vessel X-Press Godavari, which was in an anchorage near the Indian city of Haldia when a fire also broke out in some of the 500 containers aboard the vessel.

Rohan Maskarola, CEO of the Colombo Shippers’ Council, said that he is worried about the environmental damage that the gutted and sunk ship loaded with chemicals, would cause.

“Eight to nine containers had reportedly fallen into the sea and are drifting towards Negombo, North of Colombo,” he said. Negombo is a fishing center.

Asked if such disasters could be averted Maskarola said what could have been done could be ascertained only after a thorough inquiry. “The captain and the crew, who are on shore, would be able to throw light.”