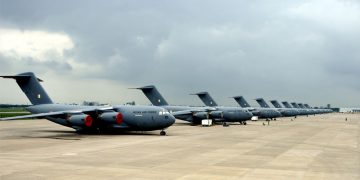 New Delhi, January 1: Earlier in December 2018, as a part of Exercise Bahubali, the Indian Air Force (IAF) used its C-17 Globemasters to carry, as this newspaper reported, tanks and armoured personnel carriers to Leh airport. The objective was to demonstrate capability to move men and equipment rapidly to border areas. Other than eight C-17’s, IAF also deployed four IL-76’s and four AN-32’s to showcase its strategic lift capability.

Meanwhile The Indian Express has reported that the IAF is planning to deploy, in the eastern sector, six units of Akash missile systems along with a squadron each of Apache and Chinook helicopters and Rafale fighter aircrafts once they are inducted. An additional squadron of Sukhoi Su-30MKI may also be deployed in the eastern sector. Besides, India is speeding up its infrastructure projects in the border regions close to China.

What is prompting this flurry of activity?

A recent paper titled “From Denial to Punishment: The Security Dilemma and Changes in India’s Military Strategy Towards China” in Asian Security by Anit Mukherjee and Yogesh Joshi may provide the answer. Before 2005, the duo argues, the power asymmetry between India and China was manageable. The terrain near the border on the Chinese side was a major barrier to offensive operations. However, now China has not just massively improved the infrastructure in the Tibet Autonomous Region (TAR), but has also undertaken an impressive military modernization programme and adopted a more aggressive posture on the India border. Especially after Doklam, as Colonel (retired) Vinayak Bhatt has pointed out, TAR has seen a sharp jump in Chinese air force activity and construction of new airstrips and heliports.

These developments have forced the Indian security establishment, conclude Mukherjee and Joshi, to shed its earlier ‘defensive’ military posture of ‘deterrence by denial’ to a more ‘offensive’ posture of ‘deterrence by punishment’. According to the new strategy, India will not just confine itself to denying Chinese forces territorial gains but will actively impose costs on the adversary and may even open additional fronts. The earlier defensive posture is no longer sustainable with China possessing the capability to launch an assault without any warning leading to depletion of Indian resources in quick time.

Mukherjee and Joshi also suggest that India is molding its Pakistan-centric focus for a China-centric one. The shift actually is in line with other developments beyond the conventional realm. Most incremental additions in the nuclear domain including the induction of longer range ballistic missiles and nuclear propelled, ballistic missile-armed submarines (SSBNs) are being made with China, not Pakistan, in mind. The range of Agni series, extending till 6000 kilometres, is a clear giveaway.

In fact, India has been criticized for pursuing ‘credibility’ of nuclear deterrence at the cost of ‘minimality’ while tenuously hewing to the concept of ‘credible minimum deterrence’. But as Vipin Narang of the Massachusetts Institute of Technology had elaborated in a 2013 paper titled “Five Myths about India’s Nuclear Posture” in The Washington Quarterly, any ‘credible’ deterrence against China will easily surpass the ‘minimum’ for Pakistan. Narang added: “India’s security managers had to choose whom they envisioned their primary deterrent adversary to be, and against whom they wanted to build and maintain a credible minimum deterrent. All the observable indicators, such as the range and numbers of their strategic missile programs, suggest unsurprisingly that they chose China.”

It is true that the range of the K-15 missile that Arihant is armed with is merely 750 kilometres. However, Arihant should just be seen as a demonstrator of triad capability. India’s three planned submarine-launched ballistic missiles (K-4, K-5 and K-6) will have a range upwards of 3000 kilometres.

The growing conventional asymmetry vis-à-vis China is not just prompting a rethink over conventional military strategy but also nuclear strategy. As Joshi along with Harsh Pant has argued in a recent book ‘India’s Nuclear Policy’, the debate over India’s no-first use (NFU) of nuclear weapons is partly stemming from a growing gap on the conventional front.

It is too early, however, to press the panic button and discard the NFU pledge. A review of conventional military doctrines, on the other hand, is definitely welcome. A shift from Pakistan-centric approach was also long overdue. The review process should keep in mind that internal balancing of China alone will not achieve much because: a) China is way ahead of India already, and b) India is a developing country with multiple competing demands on scarce capital, leaving little for a focused military build-up. Partnerships, especially with the US, will be key to not just providing external balancing as a complementary approach but also helping strengthen India’s capabilities and boost its defense manufacturing potential.