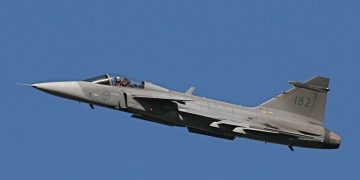 New Delhi, Oct 24 (NIA) – India has invited international aviation companies to partner with an Indian company to produce a fleet of single-engine fighter jets for the Indian air force, an official said on Monday.

The official said that many companies worldwide had received letters in the past few days from the Indian government inquiring if they would be willing to partner with an Indian company to produce the fleet of single-engine fighter jets.

The contract has been seen as one of the world’s most lucrative military deals.

Letters have been dispatched to aviation giants in US, Sweden, Italy, Germany and Russia.

The request comes just weeks after India signed a 7.8 billion Euro deal with France to acquire 36 Rafale fighter jets, which come equipped with cutting edge long-range missiles such as ‘Meteor’ and ‘Scalp’.

India has become the world’s biggest arms importer, with an economic boom enabling it to modernize its military. Major arms manufacturers are wooing the country as it replaces its obsolete Soviet-era weapons and buys new equipment.