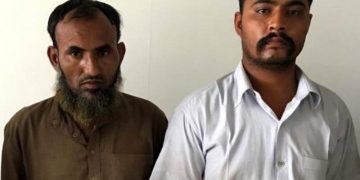 In the latest strain between the neighbors, the decision came after Akhtar was found in possession of confidential documents relating to India’s defense strategies. Akhtar works in the Visa section of the Pakistan High Commission, but pretended to be an Indian national with an Aadhar card to boot.

Indian Foreign Secretary S Jaishankar had summoned Pakistan high commissioner Abdul Basit at 11:30 am over the matter, and conveyed Akhtar’s status. The status of persona non grata means that an official who enjoys diplomatic immunity has to leave by October 29. He had been working in the Pakistani High Commission for the past three years.

Akhtar had been detained by Delhi Police on Wednesday night after being found with sensitive documents relating to deployment of troops. After being questioned by the crime branch, he was let off given his diplomatic immunity.

Delhi police arrested two Indian nationals in the case. The arrested Indian citizens were identified as Maulana Ramzan and Subhash Jangir, both residents of Rajasthan. They have been booked under the Official Secrets Act.

“The Pakistan high commission official was the kingpin. He used to recruit Indians for spying and send information to Pakistan… The (spying) module was active for one-and-a-half years. We were working (to bust) it for the past six months,” Yadav said.

“We recovered documents on defense deployment and border area maps as well as lists of BSF men who were deployed, transferred or retired,” he added.

Tensions between India and Pakistan have soared since an attack last month on an Indian Army base in Kashmir’s Uri killed 19 soldiers.

The Delhi Police officer said Akhtar and the arrested men were apprehended at the Delhi zoo on October 25 when they were meeting to exchange the documents ,The New Indian Express quoted him as saying.

“On being questioned, the Pakistan high commission official identified himself as Mehmood Rajput. He had an Adhar card and said he was a resident of Chandni Chowk. When pressed more, he revealed he worked for the high commission… He invoked diplomatic immunity,” the police officer said.

This is not the first time that employees of the Pakistan High Commission have come under the radar over alleged espionage in India. Last year, police claimed to have busted an ISI spy ring in the high commission and five persons were arrested.

Pakistan on Wednesday summoned the Indian Deputy High Commissioner for the second consecutive day to protest against what it described as “ceasefire violations” along the international border and the Line of Control (LoC) in Kashmir.

The Indian diplomat was summoned by Director General (South Asia) in the Pakistan Foreign Ministry and a strong protest was “lodged against the unprovoked ceasefire violations on 25-26 October” by Indian forces, according to a statement from the Foreign Office.

The Foreign Office said the ceasefire violations in Chapar and Harpal sectors of the international border and at Bhimber sector of the Line of Control in Kashmir had killed two civilians and injured nine.