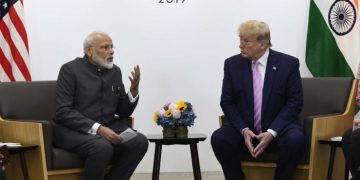 Share on WhatsApp
Washington, July 23 (newsin.asia): India on Monday denied that Prime Minister Narendra Modi had asked US President Donal Trump if he would “arbitrate” between India and Pakistan on the Kashmir dispute  that had been going on for many years.
The Spokesman of the Indian Ministry of External Affairs Raveesh Kumar said in a tweet that the Prime Minister had never made such a request and added that there can be talks with Pakistan only if cross border terrorism ceases. Any talks that are held will have to be based on the Shimla Agreement and the Lahore Declaration.
The Shimla Agreement of 1972 between Indian and Pakistani Prime Ministers Indira Gandhi and Zulfiqar Ali Bhutto,  explicitly says that the two countries are committed to  the peaceful resolution of all issues through “direct bilateral approaches.”  Therefore the agreement leaves no room for third party mediation.
The Lahore Declaration of 1999 signed by Prime Minister Nawaz Sharif and Atal Behari Vajpayee, reiterated “the determination of both countries to implementing the Simla Agreement in letter and spirit.”
President Donald Trump had offered to mediate in the Kashmir issue between India and Pakistan, claiming Prime Minister Narendra Modi had broached the subject with him during their meeting in Japan last month.
Therefore the two agreements leave no room for third party mediation.
Speaking to reporters before his meeting in the White House with visiting Pakistan Prime Minister Imran Khan, Trump said: “I was with Prime Minister Modi two weeks ago, and we talked about the subject. And he actually said, ‘Would you like to be a mediator, or arbitrator’, and I said ‘Where?’, and he said ‘Kashmir, because this has been going on for many, many years’. I was surprised for how long it has been going on.”
Trump made the assertion answering a question from a reporter about what he would do to help resolve the Kashmir issue.
But before Trump answered, Khan said: “I will be asking President Trump (on Kashmir), the US can play the most important role in bringing peace in the subcontinent, which is held hostage to the issue of Kashmir.”
“The most powerful state, the US, can solve the problem,” he said, adding that he had “made overtures for dialogue with India” but to no avail.
Trump said that he was surprised at how long the Kashmir problem has been dragging on – and Khan interjected: “70 years”.
Trump continued: “I think they (India) would like to see it resolved, and I think you (Pakistan) would like to see it resolved. And if I can help, I would love to be mediator.”
“It’s impossible to believe that two incredible countries that are very, very smart, with very smart leadership, can’t solve a problem like that. But if you would want me to mediate, or arbitrate, I would be willing to do that,” he said.
Khan then added: “I would like to tell you that right now you will have the prayers of over a billion people if you can mediate and resolve this issue.”
To this, Trump nodded and said: “It should be resolved. But he (Modi) asked me the same thing. So I think there is something. So, maybe we’ll speak to him, or I’ll speak to him and we’ll see if we can do something.”
“Because I have heard so much about Kashmir. Such a beautiful name, it’s supposed to be such a beautiful part of the world. But right now, there’s just bombs all over the place. So everywhere you go, there are bombs.. And it’s a terrible situation, been going on for many years. If I can do anything to help, let me know.”
SendShare5TweetShareShare