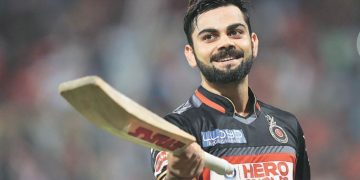 Kolkata, October 3 (ESPNcricinfo):  At the historic Eden Gardens, in front of 12,068 people, India became the No. 1 team in the world with a 178-run victory over New Zealand and captured their fourth series trophy on the trot.

It isn’t groundbreaking for a team to dominate in their own conditions. And granted, the heat and the pitches left New Zealand feeling out of place – picture Mr Bean in an MI6 facility – but when you watch R.Ashwin conjuring wickets, or Mohammad Shami demolishing stumps; when you watch M.Vijay leaving the ball orChateshwar Pujara attacking the spinners; when you watch Virat Kohli raising his game, it is difficult not to wonder whether India have found themselves an XI capable of becoming something special.

New Zealand did the best they could in the absence of their regular captain and best batsman Kane Williamson. He had finally recovered from a fever to come out of his hotel room and watch the match from the ground. He would have felt proud of Tom Latham’s  polished 74. He would have enjoyed Matt Henry ‘s big-hearted performance. He would have wanted to run out to the field when the ninth wicket fell and do his little bit for his men. But 376 was too big a target in the final innings.

The coin was in love with Kohli, doing as he bid for a sixth time in a row, in Kolkata. The weather too wanted to be on his good side, giving him the perfect conditions to ambush New Zealand late on the second day. In Bhuvaneshwar Kumar, he also had the ideal weapon to exploit a pitch that offered seam, swing and variable bounce. On the fourth day, when conditions had become better for batting, India remained tenacious. They remained patient. They were a little petulant too, putting the umpire under needless pressure every time the ball hit pad or beat bat. India often get on rolls like these. But it isn’t often that they make it last. Someone gives it away. A ball down leg. A wicket thrown away. This XI, though, may just be learning to shed those bad habits.

Take Ashwin for example. He had seen that Latham had changed his technique; that he was taking a shorter front stride so that he could be in a better position to play the ball that doesn’t turn and avoid being lbw. It paid off beautifully. He survived the first few minutes. His footwork grew assured. A good cover drive off a half-volley got him going. A delectable flick shot later in the innings exemplified that he was reading the length early and well. He went to tea unbeaten on 74.

Ashwin got him in his first over after tea. The ball was looped up. It was bowled wide. It was a tease. Like the smell of chocolate to a man who has never eaten anything other than salad. Latham went for that sinful cover drive and the outside edge was taken by Wriddhiman Saha, moving smoothly to his left.

And then there was Shami and his sexy reverse swing. BJ Watling read that a fuller delivery was tailing into him. Appropriately, he brought his front pad down the line and made sure the bat came down close to it. A second later, he was watching his off stump cartwheeling all over the place. The ball had moved one way in the air and then promptly the other way off the pitch to beat the outside edge. Shami can’t possibly have intended for that to happen; it would just be scary if he did.

Twelve out of the 20 wickets India took in Kolkata went to the seamers. Admittedly, the pitch suited them better in the early stages, but not often have India made use of that advantage. On the fourth day, when conventional swing went AWOL along with the uneven pace and bounce, they used what was given to them – scoreboard pressure and reverse swing – brilliantly. This is why India should feel upbeat about their chances. Their fast bowlers aren’t place-holders for the spinners anymore.

But it is India, it was a spinner who got things going. Ashwin mystifies batsmen with his flight and Martin Guptill and Ross Taylor were the latest scratching their heads all the way to the pavilion. One was lbw because the ball dipped, the other was lbw again because it drifted away and as a result the Kolkata Test claimed the record for the most lbws in a Test in India. The count finished at 15.

Ravindra Jadeja went around the wicket to the left-handed Henry Nicholls in the 36th over. From the amount of work he puts into his action, a batsman expects the ball to turn. He often plays for that turn, or at the very least, worries about it so much that it brings uncertainty into his game. Nicholls was put through this harrowing sequence of events and sent on his way to the pavilion as a good length ball, holding its line just outside off stump, took the edge and was taken superbly by Ajinkya Rahane at slip.

Only six times has a team ever made 376 or more to win a Test. Never has it been done at Eden Gardens, where the highest successful chase took place more than a decade ago and finished at 120 for 2. The contribution from Saha to put his team in such a strong position should not be underestimated. He became only the fourth Indian wicketkeeper to hit two fifities in a Test.

On the West Indies tour, Saha was demoted one spot from No. 6 with the team management saying they wanted to reduce the pressure on him when they went in a batsman short. India have not opted for that combination at home against New Zealand but Saha stayed in the lower order. On his home ground, he produced an innings that may well become something of a signature. He was happy to take blows to his body from the fast bowlers. He used their pace, nudging them behind point or towards backward square leg. And having blunted them, he gorged on spin. Five of his six fours and 28 of his unbeaten 58 came off the bowling of Mitchell Santner. It was only the fifth time in Test history that a batsman from No. 8 had made two fifties in a Test.

There were two Indian wickets standing on the fourth morning, when the pitch showed signs that it had slowed down. Neil Wagner picked up one of them to move his career tally to 99. Playing his 25th Test, he could have tied with Richard Hadlee’s record for the fastest New Zealander to 100 Test wickets but the final wicket went to Trent Boult.