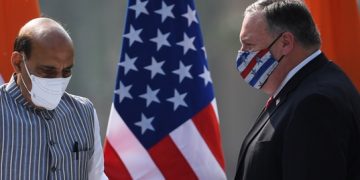 Former Ambassador and analyst M.K.Bhadrakumar wonders if going in for very close security ties with the US is wise when the world is becoming multi-polar. US Secretary of State Mike Pompeo (R) and India's Defence Minister Rajnath Singh arrive to address a joint press briefing in the lawns of Hyderabad House in New Delhi on October 27, 2020. (Photo by Money SHARMA / AFP)

Colombo, October, 27: Although there is uncertainty about the return of the belligerent Donald Trump regime in the US in November, what is certain is a general trajectory towards military tension, if not war, in Asia from the Indian Ocean to the Pacific.

Last Friday (23), the Chinese President Xi Jinping warned that the “Chinese people would speak to the invaders in a language they understand,” and recalled how the combined forces of China and North Korea defeated the “legendary US army” in Korea in 1950-53. On the other side, the US has been building up the ‘Quad’ a military alliance comprising US, India, Japan and Australia to resist expected advances of Chinese forces in the Indo-Pacific region.

As part of these resistance efforts, the US and India signed the landmark Basic Exchange and Cooperation Agreement (BECA) in New Delhi on Tuesday (27), aimed at facing the perceived threat from China. Hailing the agreement, the US Secretary of State, Mike Pompeo, said: “Our leaders and citizens see with increasing clarity that the Chinese Communist Party (CCP) is no friend to democracy, rule of law and transparency. I am glad to say India and US are taking all steps to strengthen cooperation against all threats and not just those posed by CCP. The US and India are better aligned to protect our democracies and shared values.”

Referring to the killing of 20 Indian Army personnel in Galwan Valley in a clash with the Chinese Army, Pompeo said the US stands with India to deal with any threat. Last month Pompeo told a Quad meeting in Tokyo that China had placed 60,000 troops along the Indian border.

On India’s part, Defence Minister Rajnath Singh said reaffirmed the country’s commitment to peace and security in Indo-Pacific region and saod its military to military cooperation with the US was moving forward very well. He also said India has identified projects for joint development of defence equipment.

What are BECA, LEMOA and COMCASA?

According to reports, BECA allows India and the US to share military information that includes maps, nautical and aeronautical charts, commercial and other unclassified imagery, geodetic, geophysical, geo-magnetic and gravity data. Though most of the information shared under the agreement will be in the unclassified category there is provision of sharing classified information too,Indian Expresssaid.

Earlier, in 2016, India and the US signed the Logistics Exchange Memorandum of Agreement (LEMOA), which allows the military of each country to replenish from the other’s bases and access supplies, spare parts and services from the other country’s land facilities, air bases, and ports, which can then be reimbursed.

Subsequently, in 2018, the two countries signed the Communications Compatibility and Security Agreement (COMCASA) under which the US would provide India its encrypted communications equipment and systems so that Indian and US military commanders, aircraft and ships can communicate through secure networks in peace and war.

Former ambassador and international affairs commentator M. K. Bhadrakumar cautions that BECA could give the US access to highly sensitive nerve centre of defence planning and operations in the Indian military establishment. Writing in Indian Punchline, he wonders: “How our Russian friends would take all this remains to be seen. Will they transfer advanced military technology to India if the Americans have a mole inside our system?”

He points to BECA’s links to the ‘Five Eyes Alliance’ – the US, UK, Australia, Canada and New Zealand – worked out by the US, which are to share “continuously, currently and without request” both “raw” intelligence and the “end product (that is, intelligence subjected to analysis or interpretation).

“Early this month over a weekend, members of the Five Eyes reportedly sat down with representatives from Japan and India. From the perspective of the Five Eyes, India holds many attractions. India possesses impressive intelligence-gathering networks. India is also uniquely located bordering Tibet and Xinjiang. India has a long record of monitoring the developments in Tibet. The recent border clashes with China lifted the veil on a shadowy force of ethnic Tibetan fighters who have been trained in India.”

While on the on hand, India has no option but to enter into BECA if it is to bridge the technological gap with China (it is undoubtedly a force multiplier), some observers wonder if exacerbation of the military standoff with China will help solve the Sino-Indian question which is broader than the border dispute. The confrontation with China has now gone into the economic, trade and international spheres.

India is now covertly, if not officially, challenging the ‘One China’ concept considered sacrosanct by Beijing. India is proposing to strengthen trade relations with Taiwan, which China claims. India is also loosening its control over the Tibetan resistance movement in India and giving it leeway it did not enjoy earlier.

Ambassador Bhadrakumar wonders if going in for very close security ties with the US is wise when the world is becoming multi-polar. “Unfortunately, the Indian policymakers are open to American persuasion that the international system is in transition from the post-Cold War unipolar world to another bipolar world. In reality, though, the rise of China is leading to the emergence of a kaleidoscopic multipolar world order, as many countries, including some former US allies, have begun refusing to take sides in the rivalry between the US and China,” he points out.

The other worry is whether the US will fully back India with troop footfalls if China launches a full-scale invasion of India as it did in 1962. The US did not intervene in 1962 when Prime Minister Jawaharlal Nehru openly sought help from the US and UK four days after hostilities broke out on October 20, 1962. The war lasted till November 21, but except for some equipment nothing much came from the West. Likewise, the US did not rescue its ally Pakistan in the 1965, 1971 and the 1999 military conflicts with India. The Indo-US alliance might just help the US sell military equipment to India and snoop into the Indian military Establishment.