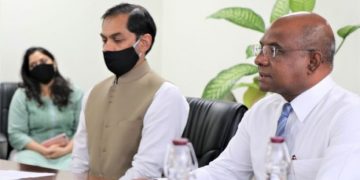 India provided financial support under the grant assistance of USD 6.9 million (MVR 106 million) extended to Maldives by the Indian government in March 2019 Male, August 28 (The Edition): The Maldivian government on Thursday inaugurated the development of Recreational, Interactive and Leisure zones in Hulhumale’ Central Park and the renovation of the reclaimed suburb’s Eastside Arrival Jetty.

Contracted to HDC, the projects are financed through a grant of MVR 10 million extended by the Indian government. The scope of the work includes development of all lawn areas, outdoor seating, bicycle route and paving of pathways within Hulhumale’ Central Park, and renovation of the island’s arrival jetty.

Speaking at the event, Foreign Minister Shahid highlighted that these projects aim to improve quality of life by establishing an attractive atmosphere with increased amenities for Hulhumale’s residents and visitors.

High Commissioner Sudhir expressed pride in India’s involvement in the projects, noting that they would expand the suburb’s infrastructure as well as promote healthy lifestyles.

India provided financial support under the grant assistance of USD 6.9 million (MVR 106 million) extended to Maldives by the Indian government in March 2019. The grant assistance aims to conduct high-impact socio-economic development projects across the country, which are managed by local authorities.