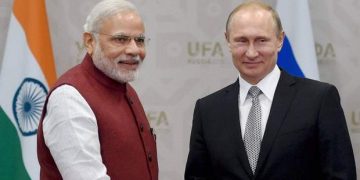 New Delhi, October 14 (NIA): Even as there is speculation that Russia is getting close to Pakistan as India has got into the American camp, Russia and India indicated that they are to sign a air-defense missile deal with India the cost of which could go up to US$ 8 billion.

The deal is expected to be sign on Saturday for five S-400 surface-to-air missile systems to give boost to country’s air defense.

The Indian media has reported that the agreement will be finalized on the sidelines of the BRICS summit in Goa, where Prime Minister Narendra Modi will meet Russian President Vladmir Putin.

The development assumes significance on the backdrop of Russia’s recent joint military exercise with Pakistan.

In December 2015, the acquisition body headed by Defense Minister Manohar Parrikar had given its nod to Indian Air Force’s ambitious project to buy Russian-built S-400 Triumf surface to air missile system to fill holes in its fledgling air defense system due to ageing air protection and patchy radar coverage.

The S 400 is a unique system that incorporates four types of missiles. Carried on mobile launchers, these missiles engage targets at the following ranges — 120 km, 200 km, 250 km and 380 km. It can engage multiple targets up to a range of 400 km.

Only US, Russia and China have such capability to neutralize aerial strike of multiple targets, including ballistic missiles and stealth aircraft from a distance.

The Indian Air Force may be well equipped to meet a threat from Pakistan but not China.This is an effort to narrow the gap with China.

The S400 Triumf will be the second costliest deal after 36 Rafale fighter jets, which India inked with France last month.

Officials claim that estimated cost of five units of S-400 Triumf is over $6 billion but eventually the figure will come close to $8 billion along with associated equipment and missiles from Russia.