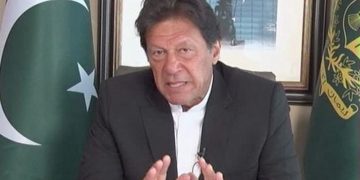 Lahore, May 6 (Arab News): Pakistan Prime Minister Imran Khan on Sunday laid the foundation stone of Pakistan’s first institute of higher learning that would focus on science and Sufism.

Located in Sohawa, a small town in Punjab, the university would “produce wise leaders who know about the state of Madinah that was formed by the Prophet of Islam,” Imran said.

Named Al-Qadir University (after Abd Al-Qadir Gilani, a famous Sufi saint from Baghdad who was born in the late eleventh century and is deeply revered by many Muslims in Pakistan) the university “is not an ordinary country,” the Prime Minister said..

“Two great minds Allama Iqbal and Quaid-e-Azam Muhammad Ali Jinnah, who had envisaged an Islamic welfare state, have created this country,” he said but lamented that Pakistan is no longer “an Islamic or welfare” state, adding it has suffered disintegration and its ideology has largely been forgotten.

The Prime Minister said it was is only merit and justice that supported the state of Madinah but also knowledge that strengthened the first community of Muslims.

“For 700 years, Muslims were the world’s top scientists since the prophet had emphasized the significance of knowledge to them.”

Imran added that Al-Qadir University is being launched in an area where a Sufi saint, Baba Noor Al-Din, had spent his life. Without divulging the details of its curriculum, he said: “We have named this institute after the chief of spirituality, Shaikh Abd Al-Qadir Gilani, and it will produce leaders who will be familiar with the state of Madinah.”
“Abd Al-Qadir Gilani linked science and spirituality,” he continued while adding that the university would offer 35 percent scholarships to students from across Pakistan and highlight how Islam and science go together.

He also noted that Chinese faculty members would teach at the university and tell its students about artificial intelligence.
“We will make spirituality a super science. No university [in Pakistan] has researched Sufi saints and Sufism. Sufism is ahead of science,” he claimed.

Analyzing Khan’s speech, senior political commentator, Mazhar Abbas, said the Prime Minister is inclined toward the notion of Sufism since he thinks it has little room for violence and is open to scientific knowledge.

“Khan was deeply inspired by a leading Sufi personality, Mian Bashir, who changed his life in many ways,” he continued. “However, he needs to do more research on the subject.”

“The proof of the pudding is in the eating,” said Abbas Nasir, former editor of Dawn, while talking to Arab News. “So let’s wait and see how the propagation of such thought fares in a society now riven by state-sponsored jihadi ideals.”