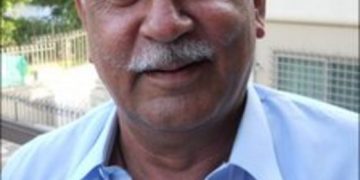 Somebody once asked a sage to define stupidity. He replied: “If someone keeps repeating the same act to get the same result but continues to repeat it expecting the result to change, he/she is guilty of stupidity.

Imran Khan’s repeated dharnas and calls for a ‘third umpire’ seem to fit the definition, but this time he seems determined to take it all the way.

Will the outcome, this time, be different? More importantly, is he culpable under the law?

Let’s begin by recalling that all these recent protests are to protest against the involvement of the prime minister and his family in the ‘Panamagate’ leaks which, in Khan’s view, are proof of corruption.

So long as the PM was attempting to block a legitimate inquiry, the protests appeared reasonable. But now, the case has been taken up for hearing by the Supreme Court; the PM has assured the court of his cooperation. So why continue protesting and that too in Islamabad? But more on this later.

Khan announced many weeks ago that he would shut down Islamabad. The original date was fixed for Oct 30 and later changed to Nov 2.

Any sensible government would immediately have approached the courts to inquire whether a lockdown of the capital, for however brief a period, is included in the ‘right to protest’ against any government. But the lack of such foresight is among our leadership’s serious deficiencies.

On Oct 23, in his public address, Khan said that if, as a result of his shutdown of Islamabad, a ‘third power’, not umpire, this time, “intervened and derailed democracy, the responsibility would be that of the PM”. How he reached this amazing conclusion is not germane to our discussion.

Khan subsequently stated he would not support martial law. He added that “if police was employed to prevent the lockdown, the chief minister Punjab would have to pay the price”.

In response to a ‘citizen’s plea’, filed by a student to prevent the lockdown of the capital, the Islamabad High Court (IHC) ruled on Oct 27 (in effect) that, a lockdown of the capital was not a legitimate part of the right to protest, that the protest be confined to an area where it did not inconvenience the public and that neither entries nor exits to the capital be blocked by either party.

I thought it was an eminently fair judgment. Apparently, Khan didn’t and stated his intent to defy the judgment and appeal against it. The defiance is on record; the appeal is yet to be filed.

But then, what is he saying?

If we connect the dots, we can read the following: ‘I, Imran Khan, will force a lockdown of Islamabad. If police forces are employed to prevent it, we will respond with the use of force. Any blood spilt in these affrays will be on the government’s head. If things get out of hand and, as a consequence, democracy is derailed by the intervention of a third power [an unsubtle reference to military intervention] the responsibility for that too won’t be mine.’

After the judgment, he seems to have added: ‘If the courts rule against us, we will defy their ruling.’

While the words in quotations probably express more accurately the position Khan has taken, there are not-so-well-hidden innuendos.

But first, let’s return to my earlier question; why continue protesting when the issue is now sub judice and, that too in Islamabad?

I must admit it appears curiously close to an attempt to coerce the court. If taken with Khan’s announcement to defy the IHC judgment, it is closer still to coercion of the Supreme Court to rule in his favor, or else.

Could Khan’s words during his public address on Oct 23 be construed as an invitation to (even inciting) the military to intervene but not declare martial law? Because if that is a conclusion one could reasonably draw, would it not be tantamount to “inciting a mutiny by the armed forces” against an elected government?

Finally, while Khan’s avowed intent to defy the IHC decision is not tantamount to contempt, if and when he were to do so, would it not be ‘contempt of court’? And if there’s bloodshed in the ensuing violence, wouldn’t it be on Khan’s head, and his alone?

Mind you, the IHC decision is quite comprehensive. It also says words to the effect that, ‘a crime is only committed after it is committed. But, if it appears inevitable, the administration is empowered to prevent it’, thus empowering the state to do what is necessary to prevent a lockdown of Islamabad.