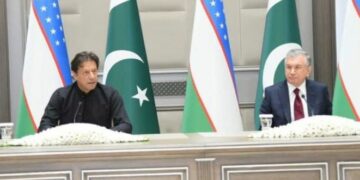 Islamabad, July 15: On the invitation of President of Uzbekistan Shavkat Mirziyoyev, Pakistani Prime Minister Imran Khan began a two-day official visit on July 15. In their discussions, Khan and Mirziyoyev, the vital importance of peace and stability in Afghanistan was emphasized. It was agreed to enhance bilateral consultations as well as coordination at the regional level in this regard, the Pakistan Foreign Ministry said.

Prime Minister Khan reiterated Pakistan’s support to a peaceful and stable Afghanistan as it was important for security, economic benefits and development of Pakistan, neighboring countries and beyond.  He highlighted Pakistan’s steadfast support for Afghan peace process and efforts to promote a negotiated political settlement

The Prime Minister highlighted growing trade and transport links between the two countries and lauded the finalization of the Transit Trade Agreement (AUPTT). It was noted that bilateral trade had recently grown four-fold and had the potential to grow several fold through concerted efforts. The Prime Minister also highlighted that a large delegation of top Pakistani businessmen was visiting Uzbekistan and had held successful interaction with their counterparts.

The Prime Minister expressed Pakistan’s full commitment and support to Trans-Afghan railway project, which he stressed was of key importance in advancing the connectivity agenda.

In the cultural realm, the common cultural heritage was highlighted and promotion of  Ziyarat tourism between Pakistan and Uzbekistan was endorsed. It was also agreed to produce a joint film on the life of Mughal Emperor Zaheer-udin-Babar.

The delegation level talks were followed by signing a Joint Declaration on establishment of Strategic Partnership and MoUs/ Agreements in wide range of areas. The landmark Transit Trade Agreement was also signed by Mr. Abdul Razak Dawood from the Pakistan side and Deputy Prime Minister for Trade and Investment of Uzbekistan. After the prestigious ceremony, the two leaders jointly addressed the joint media stakeout.

On 16 July, the Prime Minister will participate in the opening ceremony of the International Conference “South Asia-Central Asia Regional Connectivity-Challenges and Opportunities”. The Conference will see a gathering of leaders from South and Central Asia aimed at discussing ways and means to increase connectivity between the two regions.