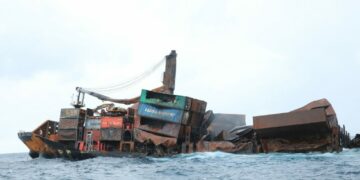 Colombo, June 4: Sri Lankan Ports and Shipping Minister Rohitha Abeygunawardena told the media here on Thursday that the fire on-board the container vessel MV X-Press Pearl was an unfortunate incident which was beyond anyone’s control.

Refuting allegations that the Port authorities had allowed the ship to enter Sri Lankan waters while it had been turned away by two other ports, he said that this ship had made two previous calls on the Colombo Port and it was on its routine stop to Colombo. He also noted that it is quite normal for containers to have issues and that it was well within the capacity of the port authorities to deal with such issues. However, he said that due to bad weather the port operations were delayed.

The Minister noted that while such incidents are unpredictable and could occur in spite of all precautionary measures being taken, some parties were attempting to condemn the government and bring them to disrepute through this incident with petty aims of gaining political mileage.

Commenting on the environmental impact on Sri Lanka as a result of this incident, he said that the government is ready to deal with the situation.

Ports Authority Chairman Gen.(rtd) Daya Ratnayake said that the X-Press Pearl is a feeder ship which collects goods from other ports and brings them to Sri Lanka, adding that around 82% of the Colombo Port operations are on transhipment of goods.

He noted that it was the inclement weather conditions that had led to the delay in Port operations for around 39 hours due to strong winds. He said that the cranes automatically shuts off when there are strong winds. Generally, he said that the Colombo Port handles around 20,000 containers per day but due to the bad weather during the 39 hours only 208 containers could be handled on the three days 24,25 and 26th.

Responding to questions raised by the media regarding allegations that the Harbour Master had been notified of the leaking container, Harbour Master Captain Nirmal Silva said that Sri Lanka was informed of the dangerous goods on the ship.

Harbour Master Silva said that a list of the goods on the ship was provided to the Colombo Port and the dangerous goods were among items permitted in any port.

Meanwhile, a search operation will be carried out to locate the Voyage Data Recorder (VDR) of the MV X-Press Pearl ship and the VDR will be used to determine conversations the ship captain had with others before and when the fire on the ship.

The CID is currently investigating the fire onboard the X-Press Pearl and the captain and crew of the vessel have been prevented from leaving Sri Lanka by the courts.