Aug 19 (NIA) – A walk into Il Ponte, one of Sri Lanka’s authentic Italian restaurants is a real treat to one’s taste buds. Established in the island country over 20 years ago, the restaurant, which is ranked amongst the best in the country, provides a high end service to its hungry diners and a true value for money.

Situated in Sri Lanka’s prestigious Hilton Hotel, in capital Colombo, Il Ponte is a rare find. The restaurant serves original Italian cuisine all cooked up by popular Italian chef – Massimo Zampar.
Massimo, has mainly majored in his own regional cuisine, where the Mediterranean tradition merged with Austro- Hungarian influences.

After graduating from the Chef School ‘Friuli Venezia Giulia’ in Grado in 1999, he began his career and made his mark as a leading Italian Chef in some of the world’s best hotels and restaurants.
Massimo now provides his best to the Sri Lankan diners.

Most of his ingredients are imported from Italy and unique dishes are served in an elegant and calm atmosphere which creates a memorable evening.

“Some of the dishes served at Il Ponte are not available anywhere else in the country. Most of our dishes are extremely popular among our diners,” a waiter, serving us said, while briefing us on the menu. 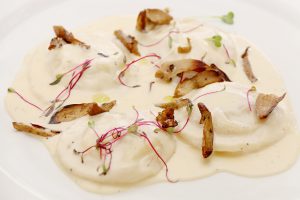 Il Ponte provides a vast variety and among the popular dishes are its Raviolli, Rizottos, Veel Steak, Pasta with seafood and its Squid which is known as the ‘Squid Ink Tagliatelle with Fresh Tomato Sauce’.

The Pea Soup, Chicken and Vegetable and Seafood Rizotto served to us, worked wonders with our taste buds, along with the fresh juices and amazing dessert.

Along with serving the best food, Massimo has also trained the local waiters at Il Ponte well when it comes to briefing diners to authentic Italian food. Waiters are trained for months by Massimo, so that diners know exactly what is being prepared for them. Il Ponte’s selection of wines, most of them imported from Italy, is also commendable. Although one of the older restaurants in Colombo, Il Ponte has lived up to its expectations, and has only improved over the years now serving the best Italian food in the country. A trip to this restaurant should not be missed!

Get to know Chef Massimo Zampar –

Once he was deeply specialized in Italian cuisine, he moved to London, where he worked as Chef de Partie from 2002 to 2004, in Carlton Tower at Grissini Restaurant which is a member of Jumeirah International Group.

He worked as Chef de Cuisine in “Spazio” Italian Restaurant, Hyatt Regency Istanbul from 2006 till 2008, where Felipe Massa, the Ferrari team driver, was a famous guest.
In 2008 he returned to Bauer Hotel, Venice, Italy where he furthered his training under the tutelage of Chef Giovanni Ciresa.

In spring 2009 Massimo moved to Manila Philippines. He worked in the Italian Restaurant ” Paparazzi ” in Edsa Shangri-La Hotel .
After a successful stint in Paparazzi, Zampar opened his own restaurant, Cafe’ Murano in Makati City, Phillipines.

In 2010 he was given the opportunity to work in one of the world’s best resorts, Four Seasons Langkawi, where he enjoyed his position as Italian chef of Serai Restaurant until 2012. Thereafter he moved to Kuala Lampur as a consultant for Nero Teca Restaurant (Italian Restaurant) .

He also worked in a Bavarian group where they had a chain of restaurants which also served Italian/Mediterranean food. In 2014 Zampar moved to Double Tree by Hilton in Johor Bharu and assisted the team in their opening of the hotel. He also brought their restaurant “Tosca” to the No 2 position out of 550 restaurants in the city.