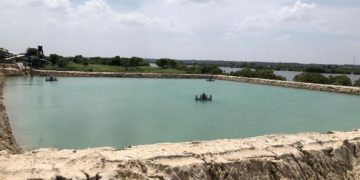 The leisure and tourism companies like HTCey Leisure have entered shrimp cultivation on a large scale. For example, Mansur Hassen, Managing Director of HTCey Leisure, set up the subsidiary, HTCey Aquaculture, in 2019 to get into large scale Vannamei cultivation.

In August 2020, the company signed an agreement with the Sri Lankan Board of Investment to infuse US$ 1.8 million to build a 12 million post-larvae capacity shrimp farm in Puttalam, in the northwestern coast of the island.

The idea of cultivating Litopenaeus vannamei or the Pacific white shrimp has been floating around since 2011, but the industry got its first shipment of brood stock only in 2018. At present, all SPF broodstock is exclusively imported by Taprobane Seafoods, from Hawaii.

Hassen too receives his broodstock from there and hopes to set up a state of the art Vannamei outgrower model on 18 acres of land. An additional 37 acres has been kept for expansions in the second phase.

The farming model is based on the Vietnamese style where intensive shrimp culture is practiced.

“This is a huge leap from the traditional farming method we have been following here in Sri Lanka, even with Vannamei. The standards are still being set, so it has been a challenge to get approvals from the government,” Hassen said.

Getting The ‘Culture’ Right

According to HTCey Aquaculture’s model, the post larvae which will arrive on the farm on day 14 will be grown in their nursery for one month. Thereafter they will be moved to ‘grow out’ tanks for 60 to 75 days. These would be 25 diameter ponds holding 350-500 post larvae per square meter.

The novelty here is that Hassen would be using high density circular ponds lined with High Density Polyethylene (HDPE). This is thought to be more cost effective than concrete tanks and more disease resistant than earthen ponds.

“Downtime in our ponds is two to three days but in traditional Sri Lankan earthen ponds, downtime can be from two to three months,”  Hassen said.

Further, earthen ponds can be affected by monsoonal weather conditions, limiting the number of cycles a farmer can have.

With this new pond system, Hassen hopes to have at least five to six cycles per year, a significant leap from the traditional one to two cycles per year.

Given the high density of the tanks, the company would start partial harvesting from day 50 onwards, allowing space for others to grow.

“This way we increase our density without harming productivity,” Hassen explained.

With the density they are going for, HTCey Aquaculture can hope to harvest 150 – 200 tons of shrimp in each cycle. In traditional mud ponds, farmers usually manage to get around 30 tons/cycle.

HTCey Aquaculture is among several hundreds of shrimp farmers which operate from Puttalam. And this has made Hassen’s model highly susceptible to the spread of disease from one farm to the other. To overcome this problem, the farm will adopt real time sensors to carefully monitor any changes in the water or environment.

Netting has been placed above all tanks, so that bird droppings (carrying shrimps from other farms that may be affected by disease) do not fall into the tanks.

“One of the main risk factors is water and we will have our own purified water in the farm and recycle it,” Hassen said.

In Phase 2 of the operation, HTCey Aquaculture is looking to grow Vannamei in low salinity water, a feat never attempted in Sri Lanka. Close to 37 acres have already been procured for this project.

“This process is highly technical in nature. We have to very carefully acclimatise the shrimp from a salinity of 25 to two. If not done properly, they can die,” Hassen said.

If the model works out, HTCey Aquaculture hopes that it would help expand shrimp culture further inland. “This would significantly bring down the cost of shrimp in the country.”

Lowering production costs could help Sri Lankan shrimp farmers like HTCey Aquaculture, compete with much larger players like India and other Southeast Asian countries for exports. Sri Lanka’s strategy has always been to target niche markets with fresh products as they were unable to compete in the mass market.

“We don’t have the advantage of cheap labour, but we can beat them with superior technology,” Hassen said.

Further, as Covid-19 batters the economies of many of the export markets in US and Europe, niche markets willing to pay more are expected to become even smaller.

“Thus there is no option but to look to compete with the economies of scale. Our products are good, now we have to perfect the way of making them more competitive,” Hassen said.

The story of Vannamei has been a long and hard one in Sri Lanka with the authorities and the private sector struggling since 2011 to introduce the species into the country. The Director General of the National Aquaculture Development Authority, Nimal Chandraratne said the introduction of Vannamei would help the country meet its target of 50,000 tons of shrimp production by 2025.

“We will still go with the Monodon species. We are at present working on getting SPF Monodon broodstock in the country. But the productivity difference between Vannamei and Monodon is significant. The latter produces 3 tons/hectare while the former could go up to 20 tons/hectare,” Chandraratne said.

This significant difference in productivity has attracted many into the shrimp sector this year. Chandraratne believes that from one company producing vannamei in 2019, the number had grown to 25 by end of 2020. This has taken Vannamei production from 505 tons in 2019 to 1500 tons in 2020.

Despite the increase in interest in Vannamei, its adoption has not been as fast as expected due to certain obstacles

“Much larger investments need to be made to get into Vannamei, especially since best management practices require that certain regulatory and other conditions be met prior to starting. In addition, there is a technology gap that needs to be bridged for Vannamei,” he explained.

Chandraratne however believes that these issues would be sorted out in course of time. “The government is very interested in promoting shrimp aquaculture. It hopes that Vannamei will be take the industry to the next phase of development,” he said.