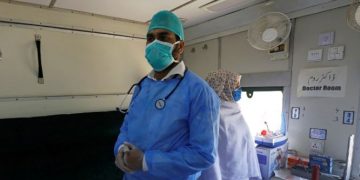 How Pakistan is winning the war against the corona virus

How Pakistan is winning the war against the corona virus Islamabad, August 1: Two months ago, the coronavirus seemed to be spreading out of control in Pakistan, a poor, chaotic country of more than 200 million with a weak health-care system that was seemingly headed for disaster. It was being compared with Brazil, another developing country with a similar population size that has been ravaged by the disease.

Instead, Pakistan has dramatically reversed course, recording a sharp decline in coronavirus cases and deaths, which are both down more than 80% from their peaks. Major hospitals report beds are freeing up in previously overflowing coronavirus wards, even in the nation’s biggest and hardest-hit city, Karachi. The tally of patients on ventilators has halved over the past month.

This is all happening as Pakistan’s neighbors to the east and west—India and Iran—are still reporting that infection rates are climbing steadily. Even more surprising, the progress in Pakistan came after Prime Minister Imran Khan resisted advice from the World Health Organization, declaring in May that lockdowns are too costly for the poor and reopening the economy.

“We charted the tough course between a strict lockdown and completely opening up,” said Dr. Faisal Sultan, an infectious diseases physician brought in by Mr. Khan as his adviser for Covid-19.

Health officials haven’t declared a win. They worry that progress could be undone, particularly with the approach of two Muslim holidays—Eid al-Adha, which falls this weekend, and Muharram—that traditionally involve public gatherings across the country.

Relatively low testing levels in Pakistan have also raised questions about the scale of the decline, but medical experts say the turnaround trend is clear. Tellingly, the proportion of tests coming back positive has more than halved, official figures show.

Pakistan locked its economy down in March, early on in its outbreak, which kept the virus from spreading widely while the population stayed home. But after restrictions were lifted in May, many Pakistanis celebrated the end of the fasting month of Ramadan with shopping sprees and visits to family.

That unleashed a burst of infections.

The government switched to a strategy of targeted lockdowns of local areas where a cluster of cases had arisen, sometimes just on one street. Residential data and experience that health officials gained over the past few years as part of a massive push to vaccinate against polio were leveraged to pinpoint trouble spots.

These days, Dr. Faisal Mahmood, a professor at the teaching hospital of Karachi’s Aga Khan University, said he is seeing more people in his clinic who are having problems recovering from Covid-19 than those currently infected.

“The drop is real, though I was skeptical initially,” Dr. Mahmood said.

From a peak of nearly 7,000 new cases of infection a day in June, on Friday the country reported 903 new cases. This week, Pakistan recorded its lowest death count in three months, with 27 on Friday.

So far, fewer than 6,000 people have died, with 278,000 recorded cases of infection. Brazil has about the same size population as Pakistan, but has reported more than 92,000 deaths and 2.7 million cases, according to Johns Hopkins University. At Pakistan’s peak, which came in mid-June, major hospitals in big cities reported being overwhelmed. The highest number of patients to die in a day was 153, on June 20.

“The decline in Pakistan is promising,” said Anna Vassall, a professor at the London School of Hygiene and Tropical Medicine. “But we are not yet certain as to the cause, nor how long it will last. The spread of Covid is driven by social behavior and it is difficult to measure how that has changed.”

Modeling had predicted countries like Pakistan would broadly follow coronavirus trends seen in the West, producing some grim forecasts. A simulation from Imperial College London produced a worst-case scenario of 30,000 deaths a day in early August.

But Pakistan has some unique characteristics that have likely been helpful in beating the virus back, health experts say. In particular, the young population and conservative, male-dominated Muslim society has limited exposure to the virus, they say.

Just 4% of Pakistan’s population is over 65—compared with 16% in the U.S. and 23% in Italy, according to United Nations data. The average age in Pakistan is 22, more than a decade younger than Brazil, and 25 years younger than Italy. And there are no bars and nightclubs. There are also no institutionalized homes for the elderly, sites of deadly outbreaks elsewhere. Women tend not to go out of the home to work, meaning the workforce is overwhelmingly made up of men who are mostly young.

Pakistan has just one megacity, Karachi, while India has several. And Karachi isn’t a high-rise city. Denser urban settings given the virus the best opportunity to spread. In Pakistan, the virus remained confined not just to the bigger cities but to pockets within those cities, officials say.

Dr. Adnan Khan, a doctor who is chief knowledge officer at Research and Development Solutions, a consulting firm, said social circles in any country are limited to family, friends, work colleagues and more. Some economic research suggests that social networks are smaller in poorer countries, he said.

The virus infected much of the part of the population that was exposed to it in Pakistan and for now, it may have run out of places to go, he said. Still, there are likely other parts of the population that remain vulnerable to the disease, particularly in smaller towns and rural areas—though it is harder for the virus to spread there, Dr. Khan said.

For supporters of the prime minister, the shrinking coronavirus threat is a political triumph. Critics earlier predicted that his strategy would lead to catastrophe and his ouster. Pakistan’s already powerful army, which has taken a very prominent role in the coronavirus response, has also gotten a boost in public esteem, analysts say.

Yet even as government officials are eager to take credit, they admit they don’t fully understand how the turnaround happened. Mr. Khan has said he wasn’t expecting the numbers to come down so fast.

Officials say complacency could still reverse people’s behavior and spread the disease. Schools will likely open in September—same for wedding halls. The government has appealed to the public to exercise restraint at the festival of Eid this weekend. As farmers return from selling their animals for slaughter in the cities, they could carry the virus into rural areas for the first time, experts warn.

“This is not the time to declare victory,” said Dr. Sultan, the prime minister’s adviser. “This is the time for humble introspection and planning ahead.”