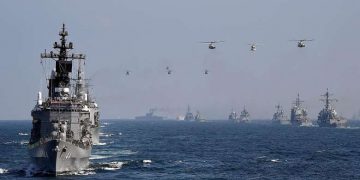 Tokyo has, albeit unofficially, abandoned its policy of shunning weapons. It has begun to add strategic considerations in its foreign relations. Colombo, August 25: After it rose from the ashes of a nuclear holocaust to be an economic marvel not long after World War II, Japan re-appeared on the world stage in an entirely new avatar – as a benign development aid giver which had abjured rearmament as per Art 9 of its constitution.

But the rise of China as an aggressive power, stretching its tentacles across Asia through the multi-billion dollar Belt and Road Initiative (BRI) backed by a display military might, has brought about a sea change in Japan’s outlook.

Today, Tokyo has, albeit unofficially, abandoned its policy of shunning weapons. It has begun to add strategic considerations in its foreign relations. Japan has unabashedly teamed up with the US in the latter’s strident anti-China campaign and is seeking the cooperation of several Asian countries and Australia to stem China’s designs in the South China Sea, the Indian Ocean and Indo-Pacific Region.

Even as Art 9 continues to be in the statute book, Japan is arming itself openly. According to an Al Jazeera report on July 11, 2020, Japan’s military budget is set to rise for the eighth straight year to US$ 48 billion. It is buying F35A stealth fighters and early-warning aircraft. It has built a large helicopter carrier (Izumo) which is being modified for use by F-35B jets. Significant investment has also been made in its domestic stealth fighter program, the F-X. Al Jazeera adds. Japan is boosting its satellite coverage and cyber-warfare capabilities. It is part of the anti-China “Quad”, an alliance with the US, Australia and India to ensure maritime security.

Writing in globalasia.org Dr.Titli Basu of the Manohar Parrikar Institute of Defense Studies and Analyses, New Delhi, says that on the economic front, Japan is working with India and US in advancing infrastructure and connectivity in the Indo-Pacific region through the Expanded Partnership for Quality Infrastructure (EPQI). Japan and India have collaborated in conceptualizing the Asia Africa Growth Corridor (AAGC).

And with Indian sanctions against China in place now, US-Japan-India could jointly explore co-operation in new technologies and digital infrastructure including 5G, as India will be the second largest market for 5G, Basu points out. Further, India, US and Japan, which uphold the principle of freedom of navigation and overflight, are collaborating in Maritime Domain Awareness (MDA). The India-US Logistics Exchange Memorandum of Agreement and India-Japan negotiation on an Acquisition and Cross-Servicing Agreement (ACSA) will help India with reciprocal support in the area of logistics, supplies and enhanced operational capacity during joint exercises and disaster relief operations.

The “Malabar exercises” help increase interoperability of different navies. Besides there are mine warfare exercises. Japan is also participating in the Cope India air exercises with India and US.

But India is not a very strong link in the chain. Though New Delhi has imposed economic sanctions on China by banning mobile apps, subjecting its investment proposals to special scrutiny and banning China’s participation in some tenders, it is still part of international groupings in which China plays a major role such as BRICS, the Shanghai Co-operation Organization (SCO) and the Asian Infrastructure Investment Bank (AIIB). Fundamentally, India desires freedom to shape its own foreign policy to further its individual interests.

Despite China’s  growing involvement, Japan is active in Bangladesh, Nepal and Sri Lanka. Writing in The Diplomat Sarbhanu Nath points out that Japan had given US$ 1.8 billion given in loans to Bangladesh in 2018. Japan is building the Matarbari deep sea port there. Japan is a very important trading partner for Nepal even as it is a part of China’s BRI. Japan accounts for a major chunk of Foreign Direct Investment in Nepal. At a 2017 investment summit held in Kathmandu, Japanese investors said that they would put US$ 1 billion in the country, Nath points out. Being a Buddhist country, Japan is keen on cultivating ties with Nepal, the birthplace of the Buddha. Japan would like to invest in Pakistan. But the latter’s “iron brother relations” with China and the security situation there have stood in the way.

Japan has had a warm relationship with Sri Lanka since the end of World War II when Sri Lanka’s delegate at the San Francisco conference, J.R.Jayewardene, made an impassioned plea to the victorious allies to treat a defeated Japan humanely. Despite China’s strong hold on President Mahinda Rajapaksa between 2010 and 2014, Japanese Prime Minister Shinzo Abe visited Colombo in September 2014 just before the visit of the Chinese President Xi Jinping. During that visit, Abe stressed the need for security cooperation between the two “maritime nations”. Significantly, Abe’s visit was the first by a Japanese Prime Minister in 24 years.Later, Tao Kono, the Japanese Foreign Minister, visited Colombo, the first by a Japanese Foreign Minister in fifteen years.

However, during the 2002-2004 peace process in Sri Lanka, Japan sent Ambassador Yasushi Akashi as its Special Peace Envoy to bring about a rapprochement between the Lankan government and the Tamil Tiger separatists through economic development programs. Japan organized a peace conference in Tokyo to secure US$ 4 billion for the reconstruction of war-torn Sri Lanka.

According to Adm. Dr.Jayanath Colombage, an expert on maritime security who is currently Sri Lanka’s Foreign Secretary, Japan sees Sri Lanka as a “strategic asset” and Sri Lanka sees Japan as a “benign and non-interfering power”. Japan was Sri Lanka’s top most loan giver till 2016 when China over took it.

Japanese funding is not for big projects but for socially relevant ones. These include the Bandaranaike International Airport development scheme; improvement of electricity generation and distribution; rehabilitation of the Kilinochchi water supply system; construction of a research and training complex in Jaffna University’s Agriculture Faculty; demining in the war-affected Northern Province; the Kelani river bridge project; measures to prevent congestion in the megapolis which is being planned; and capacity building through provision for training of Sri Lankan functionaries.

As part of its maritime security program Japan is keen on helping Sri Lanka defend its coastline better. In 2016, Japan granted LKR. 2.4 billion (US$ 15.6 million) to Sri Lanka for implementation of the Maritime Safety Capability Improvement Project. This grant aid was meant for the procurement of two 30-metre patrol vessels, including construction of vessels, sea transportation from Japan to Sri Lanka, and familiarization training for the Sri Lanka Coast Guard  (SLCG) personnel, Adm.Colombage said. Early in 2017, the SLCG placed orders for the construction of two 85-metre Offshore Patrol Vessels (OPV) with the Colombo Dockyard Ltd.,in which the Japanese Onomichi Dockyard is the majority shareholder. This project was undertaken by a loan provided by the Japanese government.

Adm.Colombage recalled that between 2008 and 2017, 65 Japanese warships had docked in Sri Lankan ports. Like other navies, the Japanese Self Defense Force Navy considers Colombo an ideal port to replenish its ships.

Sri Lanka does naval exercises with India and Japan in a series called JIMEX. And the Japanese Prime Minister, Shinzo Abe, had suggested that Sri Lanka should join the US-India-Japan “Malabar Naval Exercise”.

However, like India, Sri Lanka has some difficulties in going the whole hog with Japan because of its increasing financial dependence on China. Sri Lanka is unable to decide on giving the Eastern Container Terminal at the Colombo port located near the Chinese-run container terminal, to a consortium including Japan and India. Nationalist port workers’ have also struck work to protest against the proposed deal on the grounds that national assets should not be given to foreign entities.