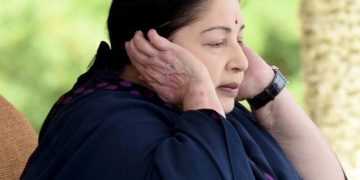 Chennai, October 19 (NIA): The Chennai-based daily The Hindu  has come out with a scathing editorial on the arrest of citizens for speculating on the state of health of the Tamil Nadu Chief Minister J.Jayalalithaa. The detainees include two bank employees of Coimbatore who had speculated about her condition in a private conversation.

“The recent arrests of several people in Tamil Nadu on charges of spreading rumors about the health of Chief Minister Jayalalithaa are a cause for serious concern.

While the State police might have its reasons to worry about threats to public order in the wake of wild rumors circulating on social media, arresting so many people reflects a heavy-handedness and a failure to distinguish between unfounded speculation and motivated trouble-mongering.

Nearly a month after the Chief Minister’s unfortunate hospitalization on September 22, the people of Tamil Nadu know very little about her health, other than the details released through sparsely-worded hospital bulletins.

Given that there has been no official word from the State government, it is not entirely unnatural that her extended stay in hospital has led to people speculating about her ill-health — some of them owe allegiance to rival political parties.

To arrest people on charges of posting WhatsApp or Facebook messages is a gross abuse of authority. Not surprisingly, it has led people to believe that such action betrays the State government’s desperation to prevent any conversation that is at odds with the overly cheerful statements put out by AIADMK functionaries and sanitized press releases.

If the government is keen on curtailing rumors, it would do better by keeping people updated regularly on the broad state of the Chief Minister’s health, a matter that is a source of concern for all well-meaning people in the State.

The arrest of two employees of a bank in Coimbatore is particularly unsettling, as the police went solely by the word of an AIADMK functionary. Neither the CCTV footage nor the testimony of other bank employees suggests any attempt on the part of those arrested to disrupt public order or, even, spread rumors.

Even if the two employees did speak of the Chief Minister’s health condition, the conversation constituted a private exchange — it cannot be compared to posts on social media, even if many of these posts were just as innocuous.

If causing public unrest is the real concern, what are the police doing about the thousands of AIADMK workers who are making a public ritual of their prayers and offerings for the Chief Minister to return to good health?

Criminal intimidation, public mischief are sections of the law that have been used by police, at the behest of overenthusiastic political bosses, on the basis of a mistaken sense of personal loyalty to Ms. Jayalalithaa.