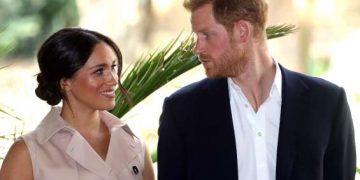 July 24 (Sky News) – The Duke and Duchess of Sussex have filed a lawsuit in Los Angeles after drones were allegedly used to photograph their 14-month-old son Archie in the back garden of their home.

The couple is alleging their privacy was breached by unnamed photographers, a way of allowing them to use subpoenas to pursue anyone trying to sell the photos until they can be identified.

In the complaint, which was filed on Thursday, the couple said they were not seeking special treatment and expected to be followed by the media when in public, but that they drew the line at photographers invading the privacy of their home.

The lawsuit said Harry and Meghan had moved from the UK to Canada at the beginning of the year and enjoyed six weeks undisturbed before their location was published by the Daily Mail.

They had moved to a gated community in the greater Los Angeles area shortly afterwards, but once again had their location published by the same newspaper.

The resulting paparazzi interest included drones being flown as low as 20ft above the house as often as three times a day.

Helicopters also hovered over the home as early as 5.30am and as late as 7pm, disturbing neighbours and waking baby Archie.

Some photographers even cut holes in the security fence around the home, the complaint alleges.

The family tried to ignore these but a recent incident was described as having “crossed a red line for any parent”.

Harry and Meghan said someone had been selling photos of Archie, falsely claiming to have taken them during a recent public outing in Malibu, despite Archie never having been in public or in Malibu since the family arrived in the US.

The couple allege that the photos were instead taken of activities in the back yard of their home, without their knowledge.

The court documents said: “The unscrupulous people shopping these photographs have not innocently mislabelled the photographs as having been taken in a public place.

“They have done so intentionally, because they know that unsolicited photographs of a young child in the privacy of his own home are very much unlawful.”

The couple had “done everything in their power to stay out of the limelight”, the complaint said, with the exception of their work, which they admitted was newsworthy.

“But the photos at issue are not news,” it continued. “They are not in the public interest. They are harassment.

“The sole point to taking and/or selling such invasive photos is to profit from a child. Such sales, in turn, stoke the paparazzi market and lead to ever more harassment.

“The fact that the images at issue remain in the possession of an unknown adult, having already been shown and shared to hundreds if not thousands of potential buyers, is disgusting and wrong.”

LA County Superior Court has confirmed to Sky News that the lawsuit has been filed and given a case number.

A statement from the couple’s lawyers added: “Every individual and family member in California is guaranteed by law the right to privacy in their home. No drones, helicopters or telephoto lenses can take away that right.

“The Duke and Duchess of Sussex are filing this lawsuit to protect their young son’s right to privacy in their home without intrusion by photographers, and to uncover and stop those who seek to profit from these illegal actions.”