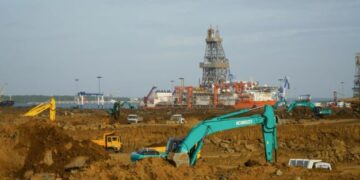 Hambantota, August 18 (Xinhua): The low hum of excavators and dump trucks echoes across 228.5 hectares of land belonging to the Hambantota International Port’s (HIP) industrial park, as contractors scramble to complete ground leveling for a 300 million US dollar tire factory.

Sri Lanka’s southern district of Hambantota is mostly known for its sprawling paddy fields, peacocks and ruins from the ancient Kingdom of Ruhuna. But the sound of heavy machinery signals the impending arrival of modern manufacturing, which the government hopes will transform the district into an industrial powerhouse and commodities trading hub.

While the COVID-19 pandemic disrupted international shipping, HIP had a busy first half of the year in 2021, with throughput nearly tripling year-on-year. Meanwhile, a slew of newly signed investments are set to kickstart export-oriented manufacturing in the Port Industrial Park and generate domestic container traffic.

“Since the pandemic, Hambantota has been able to achieve good results and seize business opportunities. The most important thing is that cargo volume for the first half of this year increased by 187 percent compared with the first half of last year. The number of our investment agreements has also increased significantly,” the CEO of Hambantota International Port Group (HIPG) Johnson Liu told Xinhua.

In November 2020, HIPG signed a 300-million-US dollar agreement with Chinese company Shandong Haohua Tires to manufacture tires in Sri Lanka in the Port Industrial Park using local rubber resources and exporting to the world market. Ground leveling for this factory is expected to be completed by the end of August.

On June 11, HIPG signed a 16-million-US dollar agreement with Chinese company Shenzhen Xinji Group to set up a plug-and-play “Park in Park” facility in the Port Industrial Park. The facility is expected to transfer skills and technology and begin production of household electric and electronic appliances within 12 months.

On August 9, HIPG signed a 58-million-US dollar agreement with Maldivian company Sea Horse Yachts to assemble and export yachts in the Port Industrial Park. The project is expected to generate 200 direct and 300 indirect jobs.

Meanwhile, HIPG is in talks with Sri Lankan company Melwa Group which seeks to set up a cement factory with a capacity of 1.3 MT adjacent to the Port Industrial Park and import inputs directly through the Hambantota harbor.

“The secret of Hambantota Port’s success in the past year is that we have a comparative advantage of having an industrial park linked to the port area, alongside favorable logistics and energy costs,” Liu said.

HIP’s immediate response to the COVID-19 pandemic was to update their standard operating procedures (SOPs) and divide staff into two different groups which would not interact with each other. Workers from each group are required to undergo PCR or antigen tests before reporting for duty.

HIPG has worked closely with Sri Lanka’s Board of Investment (BOI) to set up a one-stop shop where investors can resolve their concerns and acquire mandatory clearances and approvals.

“What we want to do is to create an accelerated way for investors to obtain the relevant approvals to set up their businesses and operate them in a smoother manner,” Edirisinghe said.

Leveraging its experience and expertise in working with Sri Lankan government agencies since 2017, HIPG adopted a “hand-holding approach” with investors, guiding them through the process in a bid to improve ease of doing business for investors.

“We assisted them in every single way, from registering the company, getting approvals, and signing agreements. It’s a continuous process that we will keep offering investors until the end of their term with us,” Edirisinghe said.

As a 1.4 billion dollar project, HIPG wishes to position itself as an international investment hub, taking advantage of the strength of Sri Lanka’s geographic location, and the policies and preferential agreements that the government is working on, she added.

The government has indicated that it wishes to negotiate a Free Trade Agreement with China, and appointed State Minister of Foreign Affairs Tharaka Balasuriya as Chief Negotiator in early August.

Since the operation of the Hambantota Port was handed over to HIPG, a public-private partnership between China Merchants Group Holdings (CMPort) and the Sri Lanka Ports Authority (SLPA), the port has largely depended on RORO throughput, which has increased from 91,323 TEUs in 2017, to 367,431 TEUs in 2019.

The Port of Colombo, Hambantota’s closest competitor, has an annual container throughput of over seven million TEUs, 80 percent of which is trans-shipments. But CEO of Hambantota Ports Investment Services (HIPS) Captain Ravi Jayawickreme believes that domestic export manufacturing is the needed catalyst for Hambantota’s long-term growth.

“We have to generate enough cargo so that we can stand on our own feet and not depend on transshipment all the time. Manufacturing within your own country is the name of the game. We’ve got to bring in raw materials, manufacture them, and send them out as finished products,” he said.

Jayawickreme says that the overall vision for the Port Industrial Park is to attract as many industries as possible to kick-start production. “Hopefully we’ll be signing agreements almost every month of this year,” he said.

Sri Lanka’s current government, led by President Gotabaya Rajapaksa, has also emphasized the need to develop a “production economy”. The BOI in 2020 allocated a 400 acre “Pharma Zone” in Hambantota to boost local production and exports of pharmaceuticals. The Ministry of Industry in March launched a new SOP for local assembly of vehicles.

The government has slashed taxes and interest rates, raised tariffs on imported consumer goods, and reduced tariffs on capital goods as part of an overall industrial strategy which emphasizes both import substitution and export orientation.

In a phone call with President Xi Jinping in March, President Rajapaksa said that Chinese-financed projects like the Hambantota Port, “have vast potential in contributing to the socio-economic development of Sri Lanka.”