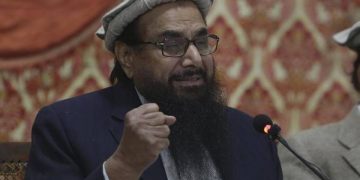 The Saeed-led JuD is believed to be the front organisation for the Lashkar-e-Taiba, which is responsible for the attacks that killed 166 people Saeed, who has several cases pending against him, was travelling to Gujranwala from Lahore to appear before an anti-terrorism court when the arrest took place, officials said, adding that he had been moved to an unknown location.

The JuD is believed to be the front organisation for the Lashkar-e-Taiba (LeT), which is responsible for the attacks that killed 166 people.

The U.S. Department of the Treasury has designated Saeed as a Specially Designated Global Terrorist, and the U.S., since 2012, has offered a $10 million reward for information that brings him to justice.

Under pressure from the international community, the Pakistani authorities have launched investigation into matters of the JuD and LeT regarding their holding and use of trusts to raise funds for terror-financing.