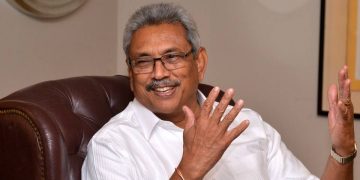 Gotabaya to re-negotiate security aspect of Hambantota port, not its commercial component

Gotabaya to re-negotiate security aspect of Hambantota port, not its commercial component Colombo, December 19 (newsin.asia): Sri Lankan President Gotabaya Rajapaksa said here on Thursday, that what worries him about the 2017 Sino-Lanka agreement on the Hambantota port, is its security aspect, and not its commercial component.

He told the Foreign Correspondents’ Association that the Lankan authorities should know which ships are entering and leaving the harbor at all times. This is a matter of border control, a function which is a prerogative of the government of Sri Lanka. “Control of the port as such should be with us,” he stressed.

The President said that the government is examining the existing agreement from the angle of security, and that one or two clauses may have to be negotiated.

The President said that the security aspect was discussed with the Special Envoy of the Chinese Foreign Minister Wang Yi and that the envoy agreed with him.

On the future of the Chinese-built Mattala Airport, the world’s emptiest airport in which India is interested, the President said that he has appointed a committee to go into the question of making it a functioning airport. But government feels that it should be run by the Air Ports Authority of Sri Lanka, he added. The President further said that government is not in discussion with India on the Mattala airport.

On the 13 th. Amendment, which devolves a modicum of power to the provinces, the President categorically stated that it will not be repealed as it is part of the constitution. Nor will he abolish the Provincial Councils which were set up under the 13A. At any rate, repealing the 13A will need a two thirds majority, he added.
Devolving Police Powers

On giving the provinces power over the police the President said that it will not be practical to divide the Lankan police force into nine separate units. If the North-Eastern Tamils need policemen who are proficient in Tamil, Tamil-speaking policemen from that area could be recruited, he said. At least up to the OIC level (police station in charge level), locals could be recruited, he added.

On granting provinces power over land, the President said that there is already autonomy over land in the Tamil North. Under the Thesavalamai law of the North, land cannot be sold to outsiders, he pointed out.
19 th. Amendment

Asked if he would repeal the 19 th.Amendment of 2015, which dilutes the powers of the directly elected Executive President, Gotabaya said that the hastily conceived 19A has confused the constitution. The constitution now lacks clarity as regards the distribution of power. It has created multiple centers of power which work at cross purposes. It has weakened governance.

“19 A was a huge mistake. We have to get rid of it. It was brought about to keep some people away,” the President said.

On the controversial US$ 480 million American grant under the Millennium Challenge Corporation (MCC) compact, President Gotabaya said that he has appointed a committee to look into it.
Sri Lankan nationalists allege that the MCC Compact is a Trojan Horse, a scheme to enable US and other foreign interests to grab land from Colombo in the West coast to Trincomalee in the East coast.

On the posibility of his government opting out of the co-sponsored UN Human Rights Council resolution on setting up accontability mechanisms for alleged war crimes, the President said: “We are working on it.” In his view Sri Lanka could not be a party to a resolution against itself and that he would not any harm to come to its own solidiers or to the freeedom of the country.

The President said that he hopes to generate 100,000 jobs for the poor to create demand through an enhancement of purchasing power. These will be government jobs in the unskilled category.

On his plans to kick start the economy he said that he would rationalize taxes to make the tax system simple and transparent. He would promote technical education to make the youth employable and invite foreign firms in the IT sector to set up production units here.

On the possibility of the government’s populist policies clashing with the recommendations of the IMF, President’s Secretary Dr.P.B.Jayasundara said that government would continue to negotiate with the IMF to get it to accommodate Sri Lanka’s concerns, even Sri Lanka addresses the IMF’s concerns. Dr.Jayasundara also maintined that the tax expenditure measures would help bring down the debt to GDP ratio from 90% to 70%.

On Sri Lanka’s over-dependence on the US and EU markets, which could make it vulnerable to sanctions, the President said that his government will explore markets in other areas. In the Middle East for example there is a US$ 165 billion demand for organic products, he pointed out.

He would tailor the tourist industry to exploit the hunger for travel among the burgeoning middle classes in Asian countries ranging from Turkey to China.

Asked if he would address the issue of the Muslims’ insecurity, since most Muslims did not vote for him, the President said that the first statement he made after winning the election was to declare that he is President of all Sri Lankans.

Asked when he plans to appoint a Muslim Minster ( his present Council of Ministers has not a single Muslim) the President said that there are no Muslims to appoint. When pointed that there are two – Kadar Masthan and Faiszer Musthapha – he said that Masthan is too junior and Musthapha cannot be appointed because there is a restriction on the size of the cabinet.

Asked about his stand on the alleged abduction of a local employee of the Swiss embassy, Garnier Banister Frances, the President said that it was a fabrication to paint him in dark colors as a “White Van” abductor and undermine his government. “The victim was me,” the President.

He clarified that the stance of his government will be to go entirely by the investigations and court decision. He is keen to see that the issue is not politicized and turned into a bilateral issue between Switzerland and Sri Lanka. The President said that he had told the Swiss Ambassador not to polticize the issue.

On the Swiss Foreign Ministery’s charge that the CID and the judiciary are flouting the Rule of Law and international standards and are subjecting the alleged victim to unfair conditions, President Gotabaya Rajapaksa said that extra facilities had been given to here, which even did not get when he was questioned by the CID a number of times.

“She was allowed to have a lawyer who sat next to her while she was questioned. I was not allowed this facility,” he said.

The President said that he did not think that the Swiss embassy was involved in the alleged abduction. He attributed its interest in the case to a natural concern as an employer.

The President said that parliament will be dissolved in March 2020 and elections to it will be held at the end of April.