More than 129 people killed after stampede at Indonesia football match

Shakira to stand trial in Spain for tax evasion

by Editor
in Around South Asia, Around The World, Top Story
Reading Time: 2 mins read
3 0
A A

London, February 25 (newsin.asia): The Global Tamil Forum (GTF), an organization of Sri Lankan Tamil expatriates based in the UK, has written to the British Home Secretary, Amber Rudd, to curtail the visas given to the family of Sri Lankan Defense Attache Brig.Priyanka Fernando, who had to leave the UK for making a threatening gesture towards Tamil demonstrators on Sri Lanka’s Independence Day on February 4.

In a letter to Rudd with copy to Foreign and Commonwealth Secretary Boris Johnson dated February 23, Suren Surendiran of GTF said: “ We thank you for returning Brigadier Fernando to Sri Lanka. However, we understand that Brigadier’s family members continue to live in the UK. We are therefore writing to request you to curtail their visas and return them back to Sri Lanka.”

“ The Immigration Rules provide for the refusal of leave to enter or the curtailment of leave already granted in circumstances where there are discretionary powers to allow the Home Secretary to act in a manner that protects the interests of the United Kingdom and those resident within the country.” 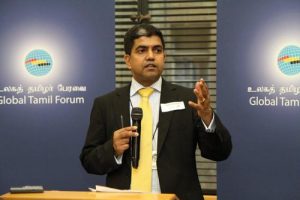 “Therefore, their visas in effect stand and fall with Brigadier Fernando. In the circumstances, we respectfully ask you to curtail their visas and return them back to Sri Lanka.”

Brig.Fernando was recalled by Sri Lanka’s Foreign Ministry.Since there was a lot of sympathy for Brig.Fernando among the majority Sinhalese community in Sri Lanka for his stand on the demonstration which was thought to have been organized by pro-Tamil Tiger elements, President Maithripala Sirisena stopped his recall.

However, he was eventually brought back apparently due to diplomatic pressure from the UK.

Brig. Fernando had gesticulated in a way that suggested that he would cut the throats of the demonstrators. Videos and pictures of the gesticulation had gone viral on the social media embarrassing the Sri Lankan government.

(The featured image at the top shows former Sri Lankan Defense Attache in the UK Brig.Priyanka Fernando gesticulating to the Tamil demonstrators in a threatening manner)

More than 129 people killed after stampede at Indonesia football match