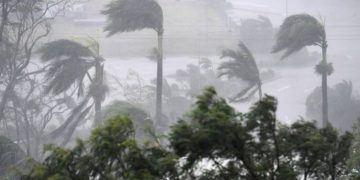 The Global Commission on Adaptation (GCA), led by former UN Secretary General Ban Ki-moon and including Bill Gates, has stressed the urgent need to adapt to, and be resilient towards, climate change.

The GCA’s report entitled: Adapt Now: A Global Call for Leadership on Climate Resilience (September 2019)  warns that without adaptation, climate change may depress growth in global agriculture yields up to 30% by 2050.

The 500 million small farms around the world will be most affected it points out. The number of people who may lack sufficient water, at least for one month per year, will soar from 3.6 billion today to more than 5 billion by 2050.

Rising seas and greater storm surges could force hundreds of millions of people in coastal cities from their homes, with a total cost to coastal urban areas of more than US$ 1 trillion each year by 2050. Climate change could push more than 100 million people in developing countries below the poverty line by 2030.

But there is still time to protect and work with nature to build resilience and reduce climate risks at all scales, the report says encouragingly.  It also strongly argues that investment in climate adaptation and resilience is cost effective and worthwhile in every possible way.

As per the report, the overall rate of return on investments in improved resilience is high, with benefit-cost ratios ranging from 2:1 to 10:1, and in some cases even higher.

Specifically, the analysis finds that investing US$ 1.8 trillion globally in five areas from 2020 to 2030 could generate US$ 7.1 trillion in total net benefits.

The report says that the underlying inequalities in society must be taken note of and addressed in climate change adaptation programs. People most vulnerable to climate impacts must be involved in decision making, it urges.

Improved dry land crop production, mangrove protection, and water resources management have economic, social and environmental benefits. These  benefits will be on-going and not static in time.

The report says that risk assessment must be accurate so as to better spend resources and get the maximum benefit. There is a need to make risk visible, requiring more precise characterization of who and what is at risk—and why. As part of making risk visible, the public and private sectors can work together to more explicitly put a “price” to risk in both economic and financial decision-making.

Equally important is to understand what works and what options to prioritize by supporting experiential learning, stimulating innovations in science and technology, sharing solutions, and piloting new business models and financial services.

Importantly, there should be no talking down to local people. “  It is important to consider all forms of knowledge, recognizing that valuable local knowledge rests with communities and indigenous populations,” the report said in a plea to be democratic and grassroots-oriented for attaining optimum results.

Even though the imperative for action is clear, money is not flowing at the pace or scale needed, the report regrets. The government or the public sector is an essential provider of finance to protect people and livelihoods across communities and sectors. It is also an enabler of increased private sector finance through disclosure requirements and incentives, like buying down the risk of providing financial services to small-holder producers.

On its part, the private sector should increase investments on its own account, but it should also increasingly complement the public sector in sharing the costs and benefits of adaptation investments, such as for infrastructure, contingency finance, and insurance, the report suggests. Finally, there is a critical need for higher levels of international financial support for adaptation in developing countries.

The tasks ahead are long and onerous given the dangers foreseen. The global demand for food will increase by 50% even as yields decline by up to 30% by 2050 in the absence of ambitious climate action. A more resilient food future will rely on sharp increases in agricultural R&D, which has demonstrated benefit-cost ratios between 2:1 and 17:1. There is a need for better alignment of government finance and incentives for farmers with long-term, sustainable, climate-smart production.

There needs to be a radical change in access to information, innovative technologies, and finance to enhance the resilience of 500 million small-scale farming households whose livelihoods are most critically impacted by climate change.

Many nature-based adaptation solutions are also beneficial for mitigation and can provide one-third of the climate mitigation needed between now and 2030 to keep global warming below 2°C.

Climate change is integrally connected to water systems and resources. Successful adaptation will require scaled-up investments in healthy watersheds and water infrastructure, dramatic improvements in efficiency of water use. Without efficient water allocation and use, the GDPs of India, China and Central Asia would be lower by 7 to 12% by 2050.

Urban areas are home to more than half the global population and are centers of opportunity and innovation. Adaptation efforts, if designed well, can take advantage of this “transformative energy” and generate high economic returns, the report suggests.

In coastal cities, for instance, the cost of good adaptation is one-tenth the cost of no action. To plan and deliver more resilient urban services, cities everywhere need to invest in better climate risk information and technical capacity, drawing on credible topographic and community-level data.

Cities should also invest in nature-based solutions to tackle water and heat risks, and in upgrading the living conditions of the 880 million people living in informal settlements that are highly vulnerable to climate change.

Investments in infrastructure need to directly build resilience, whether for storm-water drainage in cities or protecting coastal communities against sea-level rise. This will require developing blended public-private approaches that share the costs and benefits of investing in resilient infrastructure, the report says.

Need For Community Sense And Prior Warnings

Finally, the report urges people to go beyond protecting individual assets to ensuring that whole systems are more resilient by making the right choices about where and what to build, which existing assets to upgrade, prioritizing green infrastructure wherever possible, and ensuring that infrastructure continues to function even as damages occur.

“We need to proactively yet voluntarily move people and assets out of harm’s way through better planning and investment decisions. At the same time, we need to scale up efforts to warn and prepare people ahead of disasters, actions that can dramatically reduce the loss of life, and exhibit very high returns on investment.”

Finally, social safety nets and improvements in forecast-based planning can help hasten recovery from disasters when they do strike, the report says.