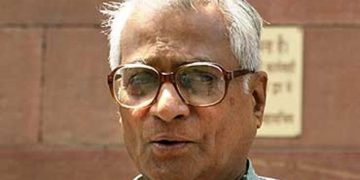 Mumbai, January 30: There are not many heroes in Indian politics today. Courageous men and women who stood erect in the face of a cyclone of hardships in their lives. Those for whom politics was a way of pursuing their ideals, principles and convictions even though the path was strewn with thorns. You might or might not have agreed with their politics, but there was no way you could dispute that amassing wealth (for themselves and their families and friends) or self-aggrandisement – temptations so common among political leaders of many parties these days – was not their motivation. They belonged to a different era.

George Fernandes, who died on Tuesday morning, at age 88, was one such Indian hero from an era that now seems so far away from us. For those familiar with Indian politics from the 1960s till the first half of the last decade, his name was synonymous with struggle and indomitable fighting spirit. One of the stars of the anti-Emergency struggle, he caught my imagination during my student days in Bombay. Listening to his fiery speeches before jam-packed audiences at Kamgar Maidan, Nare Park and Shivaji Park was a mesmerising experience. Little did I know then that I would have the privilege of working closely with George Saab – yes, I, like most of his admirers, always called him “George Saab” – during my long association with the Bharatiya Janata Party and the National Democratic Alliance government headed by Atal Bihari Vajpayee.

We do not choose the way we die. To George Saab, death was a relief because he lay bedridden, speechless and almost unconscious, for many years. It was a most painful sight when I last saw him five months ago, along with my good friend (also his good friend) RV Pandit at the residence of his estranged wife Leila Kabir in New Delhi. A leader who lived like a lion throughout his active life was lying with minimal symptoms of life. The experience was especially agonising for both Pandit (an intrepid public figure and publisher of Imprint fame) and me, because we both had gone the previous day to pay our last respects to Vajpayee, who too lived a similar “lifeless life” for many years before he breathed his last on August 16 last year. We did not have the heart to go and see Jaswant Singh, another dear colleague of George Saab, who has been in a similar condition since 2014.

Birth and background matter a lot in Indian politics – either as help or handicap. Born in a devout Christian family in a place (Mangalore in Karnataka) so far removed from the centre of gravity of national affairs, George Fernandes had little natural advantage to make it big in life. His parents wanted him to become a priest. He rebelled – and came to Bombay, the City of Dreams. But his dream was different. Having had to live on the glittering city’s footpaths and thus see and experience the miserable plight of working people, he dreamed of a world free of poverty, injustice and exploitation. Long before liberation theology became an attractive ideology in the Christian Church, he had already become its committed practitioner.

He quickly became one of Bombay’s – and India’s – best-known trade union leaders. Defeating the Congress party’s SK Patil, the city’s “uncrowned king”, in the 1967 parliamentary election was as much a tribute to George Fernandes’ leadership qualities as to Bombay’s inclusive character those days. Linguistic chauvinism and communal poison, so potent in today’s Mumbai, had not yet marred the city’s politics. Indeed, his shining success was one of the reasons for Bal Thackeray, who had founded the Shiv Sena in 1966, to launch a vicious campaign against South Indians in Bombay, with its venomous slogan “Hatao lungi, bajao pungi”.

His best years as a fighter with a cause, and without a pause, would come when the decade of the 1970s dawned. He led the historic Railway Strike in 1974, the only time trains in India stopped running because of action by protesting workers. The strike contributed in no small measure to Prime Minister Indira Gandhi’s decision to impose the draconian Emergency rule in June 1975. Again, one of the heroes of the struggle against Emergency, and for the restoration of democracy, was George Fernandes.

A principal architect of the NDA

His political life thereafter took many zig-zag turns. Those days, it used to be said, disparagingly, that three quarreling socialists would split their party into four parts. The debacle of the Janata Party government (which had been voted to power with such heightened hopes in 1977) and the subsequent splits in the Janata Party and the Janata Dal left George Fernandes dispirited and almost directionless. The only direction he never abandoned was his anti-Congressism. After the BJP emerged as the sole viable alternative to the Congress, he inevitably allied with it mid-1990s onwards. Many of his erstwhile admirers and supporters criticised him for this, but he stood his ground.

It must be said to his credit that George Fernandes became one of the principal architects of the BJP-led National Democratic Alliance, and moved it significantly away from the polarising politics of Hindutva. It was a time when both Vajpayee and LK Advani (who had led the BJP’s Ram Janmabhoomi movement) had themselves consciously tried to take their party on a non-divisive and inclusive trajectory. I have personally witnessed how George Fernandes won the trust – also respect – of not only Atalji and Advaniji, but many people in the Rashtriya Swayamsevak Sangh. He became a bridge-builder between the BJP and the socialist movement (even though it had become very weak and splintered by then), in the same way that Ram Manohar Lohia and Jayaprakash Narayan, two firebrand socialist leaders from the era of the freedom struggle, had tried to do with the Bharatiya Jana Sangh, the previous avatar of the BJP.

It was during his years as India’s defence minister and the NDA’s convenor that I (then working in Vajpayee’s Prime Minister’s Office) came in close contact with George Saab. Since I was living alone in Delhi those days, I used to frequently go to his house (6 Krishna Menon Marg) for lunch or dinner, and often both. Since we both were Kanndigas from Bombay (although his mother tongue was Tulu), we enjoyed conversing in Kannada as well as Marathi. His official residence was as much a picture of simplicity as his life. He was always dressed in (mostly unironed) khadi pajama and kurta, which he used to wash himself.

A voracious reader, his bedroom, even his bed, was full of books. Very often, his bed would be occupied by his loving dog. Every discerning visitor to his house noticed two startling things. One, it had no gate – and minimal security. He wanted no barrier between himself and the common people. Two, several rooms in the house were almost permanently reserved for refugees (persecuted political activists) from Myanmar and other countries or ordinary political workers from different parts of India.

Age mellows most rebellious leaders. It was no different with George Saab. In the last decade of his active political life, he had become open-minded about several ideological issues. For example, he was very critical of China for many decades and had refused to visit Beijing even after being invited as India’s defence minister. Vajpayee had to prod him to go to China. But when he returned, he told me he was very impressed by our neighbor’s achievements, adding that both India and China should remove the trust deficit between them. An internationalist to the core, he played an influential role in the Vajpayee government’s decision to denounce America’s invasion of Iraq, and its refusal to participate in the anti-Iraq alliance.

Wrongly blemished by the Congress

George Saab’s most trusted colleague for the longest part of his political life was Jaya Jaitly. He shared her passion for preserving India’s priceless heritage of crafts and arts. If George Saab’s otherwise bare and chaotic house had the look of aesthetics with a social cause, it was provided by the incredibly beautiful maps and posters made by Jayaji and her creative team of activists.

When I look back, it seems to me that George Saab’s innate simplicity and honesty were targeted by his political opponents in the Congress party. The sting operation carried out by Tehelka in 2001, which led to his resignation as defence minister, must go down as one of the most immoral acts in the history of Indian journalism. After 18 long years, Jaya Jaitly is still fighting a court case to prove her innocence – which undoubtedly will be proved someday. In the same way that George Saab’s innocence was established by the courts in the other non-existent scandal – the “Coffin Scam” – in which Congress leaders falsely accused him of having made money on the bodies of martyrs of the Kargil War.

Again, when I look back, I think that George Saab was wrong in the extreme and immoderate ways in which he attacked the Congress. He often criticised Sonia Gandhi by referring to her Italian origin. But now that her son, Rahul Gandhi, is trying to give the Congress a new look – in a welcome move, he has promised that his party, if it comes to power, would not misuse institutions of governance and would not silence critical voices in the media – he should in all sincerity and truthfulness accept that his party was wrong in unethically blemishing the reputations of George Fernandes and Jaya Jaitly.

From Mangalore to Mumbai to Muzaffarpur

To reiterate an important point, it was a long and uphill struggle for a person with a self-evidently Christian name to become – and remain for such a long time – a central figure in Indian politics. This is testimony to India’s intrinsic secular character. George Fernandes’ journey from Mangalore to Mumbai to Muzaffarpur in Bihar (from where he was elected to the Lok Sabha as many as five times) is nothing short of heroic. Very few leaders in our country have been successful in acquiring such pan-India appeal.

But there is also another salient point when we look back at the era in which he lived. The trade union movement, which catapulted him to national prominence, is almost dead now. Unlike in the bygone decades when SA Dange, Jyoti Basu, Chaturanan Mishra, Dattopant Thengadi and even Datta Samant were nationally known figures, not a single trade union leader stands out in today’s India. Workers’ voices are completely suppressed by the voices of corporate leaders. The other big change is that socialism (which still lies, mutely, in the Preamble to the Indian Constitution) and the socialist movement have totally receded into the far corners of the political discourse in contemporary India. It is, therefore, difficult for the Indian youth today to appreciate the extraordinary grit of a man called George Fernandes. But those who wish to learn from the twists and turns in independent India’s history, and are committed to building a better India, cannot ignore him or the times that shaped him.

Sudheendra Kulkarni, who served as an aide to former Prime Minister Atal Bihari Vajpayee between 1998 and 2004, is the founder of Forum for a New South Asia, based on India-Pakistan-China cooperation.