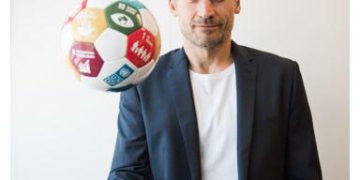 Coster-Waldau, who plays fan-favorite anti-hero Jaime Lannister in the worldwide hit series, helped blow the whistle on poverty at the inaugural Global Goals World Cup, held at this year’s Social Good Summit at the 92ndStreet Y in Manhattan’s Upper East Side.

His stint as a referee was to support the 17 Global Goals, agreed by world leaders to tackle our planet’s toughest challenges by 2030. Also known as the Sustainable Development Goals, their aim is to create a shared vision of a future where poverty, inequality and climate change are a thing of the past.

“Refereeing this powerful, passionate and dedicated group of women was a humbling experience. But I have to admit, it felt good to show poverty the red card,” said Coster-Waldau. “My main mission as UNDP Goodwill Ambassador is to raise awareness and support for the Global Goals to end poverty, which cannot be achieved without empowering women. So being part of the women’s tournament for the Global Goals was a perfect way to get started.”

On Saturday, Coster-Waldau was appointed UNDP’s latest Goodwill Ambassador. In this prestigious role, he will champion the Global Goals, particularly focusing on gender equality and mitigating the effects of climate change. His appointment came on the eve of the United Nations General Assembly, as world leaders come together in New York City.

“There are 17 Global Goals responding to every important challenge, from poverty to climate change to gender inequality. Whichever challenge you believe to be the greatest facing our world, one of the 17 goals is designed to overcome it,” Coster-Waldau said “I hope that the positive energy of today’s tournament will inspire others to join us and UNDP as we take charge of our future and take action to make this world a better place for all.”

UNDP and its partners UNF, Mashable and 92nd Street Y are hosting the seventh annual Social Good Summit at the 92nd Street Y in New York and around the world. The summit is a two-day conference examining the impact of innovation, technology and new media on social good initiatives around the world. Held during UN Week on September 18th and 19th, it unites a dynamic community of global leaders and grassroots activists to discuss solutions for the greatest challenges of our time.

Each team will decide how they want to set their development agenda by choosing which Global Goal to play for. Teams will be awarded special points for creativity in advocating for their chosen goal.