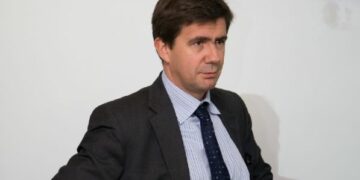 Paris, September 23: The Virginia-class fast-attack submarine, the USS Illinois. Australia has scrapped an order for 12 similar similar submarines from France’s Naval Group in favour of a deal with the US and UK to provide nuclear-powered submarines.

Australia has signed up to an empty promise by agreeing to a US nuclear powered submarine deal for which there is no clear delivery date or technology transfer agreement, the furious head of the French defence contractor Naval Group has warned.

Pierre Eric Pommellet also said his firm will be seeking compensation for Australia’s cancellation of a €56bn (£48bn) contract for 12 new Attack-class submarines, which he described as a purely political decision which came without warning.

His comments to Le Figaro were the latest allegations that Australia’s decision to replace the French contract with the Aukus deal with the UK and US was political rather than defence-based. Australia has implied that the contract cancellation followed a new assessment of the security threat posed by China.

Pommellet said the only tangible point of the proposed new contract “is the decision to acquire nuclear powered boats. When, how, with which partners, which technological transfer? No one knows. Australia, on the other hand, knows what it is losing and what we were committed to building.”

He added: “At Naval Group … we had no warning sign or the slightest information that we were becoming a plan B in favour of a plan A with the United States and the United Kingdom.

“Discussions between these two countries and Australia have undoubtedly been conducted in a very small circle at the highest political level for several months.

“This decision was announced to us without any notice, with incredible brutality.”

The submarine contract, Australia’s biggest defence acquisition, had been plagued by delays, cost blowouts, and disputes over local industry involvement.

But the French ministry of defense said this week that Australian military officials sent them a letter saying they were “extremely satisfied” with French submarines just hours before they announced the cancellation of the project.

The Australian government has played down the significance of the letter to Naval Group, but Pommellet rejected claims that Canberra had given a clear warning that the contract was risk.

“All the lights were green. On the morning of 15 September, we received a letter officially informing us that the Australian government had accepted our offer as well as the technical choices that would have made it possible to initiate a new phase of the programme, called ‘basic design’ of the submarines. Everything was OK to finish the negotiation and sign this new contract quickly.”

He said the claim for compensation will be given to the Australian government in a few weeks, adding “as an industrialist, we will assert all our rights”.

In the interview he continually sought to defend the reputation of his firm, saying the cost increases were due to the Australian government reassessing its security needs, including increasing its requirements from eight to 12 submarines.

Its technical requirements have also evolved, particularly in cybersecurity, a theme that was less significant in 2016, when the contract was first signed.

He insisted Naval Group was the only company in the world with the know-how to produce both conventional and nuclear submarines, implying his firm should have been allowed to bid if Australia had decided to rewrite the contract specifications.